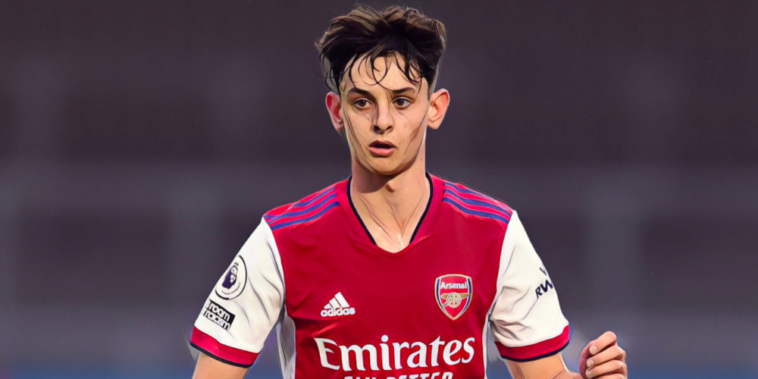 Each season a promising young talent breaks through to become a household name and ahead of the 2022/23 Premier League campaign we’ve picked out one youngster from each top six side that we’d like to see get a chance next season.

Arsenal’s academy has thrived in recent seasons with Bukayo Saka and Emile Smith Rowe having stepped up to the senior side to become key figures, with Charlie Patino the latest homegrown product causing much excitement at the Emirates.

The Gunners secured the signing of Patino from Luton Town as a 12-year-old and he has since progressed rapidly through the ranks, earning a senior debut for Mikel Arteta’s side and scoring during the 5-1 Carabao Cup quarter-final win over Sunderland in December.

Technically gifted with immaculate close control and an eye for a pass, the 18-year-old has been described as the most exciting Arsenal prospect in memory.

“Of all the years I’ve been scouting, he’s the best kid I’ve ever seen,” Arsenal scout Brian Stapleton told Goal.

“Sean O’Connor discovered Jack Wilshere and he said to me that Charlie is the best player who has ever walked through the doors at Hale End.”

Given Arsenal’s lack of depth in central midfield at present, Patino will be hoping to follow in the footsteps of Saka and Smith Rowe and earn further first-team opportunities during the 2022/23 campaign.

Chelsea are in need of defensive reinforcements following the exits of Antonio Rudiger and Andreas Christensen this summer, but in Levi Colwill the club might just have a homegrown solution.

Colwill spent the 2021/22 campaign on loan at Huddersfield Town and was an outstanding performer in the club’s push for promotion, earning admiring glances from the Premier League after helping the Terriers to the play-off final.

The teenager brought a left-footed balance to Huddersfield’s back three system and Thomas Tuchel will want to run the rule over the 19-year-old during pre-season as he looks to find a replacement for Rudiger.

Good time away and happy to make my u21 england debut 🦁❤️ pic.twitter.com/R6urLgDjf9

Leicester City were understood to have been interested in taking over Colwill’s loan arrangement during the January transfer window with the centre-back having handled the rigours of Championship football in fine style.

Huddersfield have been in no doubt at the scale of the talent at their disposal last season, with the club’s head of football operations, Leigh Bromby, having hailed Colwill as the best talent he has seen in his age bracket. It is high praise indeed from a club who have counted Ben Chilwell, Emile Smith Rowe and Trevoh Chalobah among their successful loanees.

“The players and staff really like him and love working with him,” Bromby told Goal in March.

“He’s looking to improve and working to get better. Talent-wise, for his age, he is the best I’ve seen when I’ve either been playing or coaching.

“The chances, for me, are so high that he will go back and play for Chelsea and England.”

The Reds moved quickly to secure a deal for the talented teenager, agreeing an initial fee of £5m for a midfielder who was named in the Championship’s Team of the Season for 2021/22.

Carvalho scored ten goals and provided eight assists in the league for Fulham last season and will hope for opportunities at Anfield despite the competition for places in Jurgen Klopp’s midfield.

Liverpool have struggled to find a player who serves as the link between the midfield three and forward line in recent campaigns and it will be hoped the 19-year-old can fill that role as he develops in the coming campaigns.

Carvalho’s displays have see him named on the shortlist for the Golden Boy award alongside fellow Liverpool youngster Harvey Elliott, and the two will be key to the evolution of the Reds’ midfield as several stalwarts of the Klopp era enter their thirties.

For the second successive campaign Manchester City were crowned winners of the Premier League 2, though did so once again in 2021/22 under different circumstances.

Several of the side that won the title the previous season departed on loan spells, whilst key figures from that side in Liam Delap and Cole Palmer were either injured or with the first-team for large spells this season.

At the heart of the club’s success was midfielder James McAtee, who was handed his first taste of senior football last season with two Premier League appearances.

Academy manager Brian Barry-Murphy has been delighted with McAtee’s development this season, insisting there has been more to his evolution than just attacking output.

“For me, the real development has been in terms of the other side of his game, the side that goes unnoticed,” Barry-Murphy told the Manchester Evening News. “The defensive side of the game, how he presses and recovers. How he deals with disappointment. Things that haven’t been exposed for a long time.

“He’s really improving them and showing that they matter. They’re the things that are so important when he does feature at first-team level. The fact he’s improving those are symbolic of what we want to be in our group.”

Breaking into the Premier League champion’s side will be no easy feat for McAtee despite his obvious talents and a loan move could be on the agenda. Huddersfield Town have been linked and the teenager could be the latest success story to develop at the Terriers.

Hannibal Mejbri is a rare footballer who has made more senior international appearances than outings for his club side, with the teenager having already cemented his status with Tunisia.

The 19-year-old has won 16 caps for the national side despite making just three appearances for Manchester United, a number he will want to improve upon under Erik ten Hag this season.

Hannibal arrived at the Red Devils for an initial fee of £4.5m from Monaco in 2019 and has long been backed to breakthrough into the senior side, winning United’s Denzil Haroun Reserve-Team Player of the Year award for 2020/21.

The exits of Paul Pogba, Nemanja Matic, Jesse Lingard and Juan Mata could open an opportunity for the midfielder this summer and he will hope to impress Ten Hag during pre-season to force his way into the new manager’s plans.

Comfortable in possession and when carrying the ball forward from midfield, he has the attributes to inject a new dimension into an engine room that has been heavily criticised in recent campaigns.

James Garner – returning from an impressive loan spell at Nottingham Forest – and left-back Alvaro Fernandez are among the other prospects seeking a senior chance this term.

Alfie Devine has already made his mark at Tottenham, setting new records as the club’s youngest-ever player and goalscorer during the 2021/22 campaign.

Handed his senior bow aged just at 16 years and 163 days, he came off the bench to score in a 5-0 win over non-league side Marine in last season’s FA Cup.

Devine’s debut was the highlight of a season in which the precocious midfielder shone at u23 level, impressing against opposition much his senior to score nine goals and provide three assists in 17 appearances in the Premier League 2.

The 17-year-old is expected to feature prominently for England u19 at this summer’s European Championship in Slovakia, where he has found a regular role in the team despite playing up an age group.