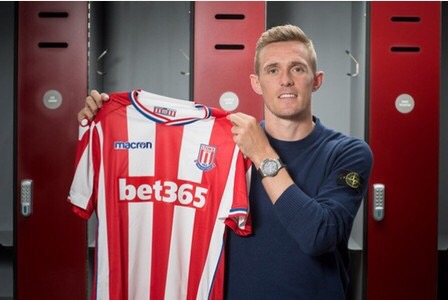 West Brom captain Darren Fletcher is set to join The Potters on a free transfer this summer.

The Baggies offered the 33-year-old a new contract but were unable to agree personal terms leaving the Scotland captain to choose to move away from the Hawthorns in favour of a move to the bet365 stadium.

Speaking after the confirmation of his move, Fletcher said:

“The opportunity to work under Mark Hughes proved too much a temptation to pass up.”

Fletcher moved to the Hawthorns from Manchester United back in February 2015 and since became an important figure in West Brom’s squad. The Scotland international will be involved in the World Cup qualifier against England next week.

The midfielder will be competing for a place in the side along with: Joe Allen, Charlie Adam, Glenn Whelan and Giannelli Imbula.

I wanted to hear what Stoke fans made of this signing so I interviewed Stoke fan Adam on twitter to see what he made of the arrival of Darren Fletcher.

Do you think Darren Fletcher was needed?

Adam: It wouldn’t have been a priority signing and it now depends on what’s  next for Glenn Whelan and Charlie Adam as I think he’s better than them. I would however have preferred a younger, box-to-box midfielder.

Adam: So far, absolutely yes. I’m not sure what the long term plan for Hughes is now.

With Fletcher coming into the squad, does this mean Adam or Whelan are likely to leave?”

Adam: I’d hope so. Out of the two, Hughes is more likely to try and get rid of Adam I think. Neither are good enough though

I was interested to see what role Stoke fans think Fletcher will play.

Adam: Again, I think it depends on how Hughes sees Whelan. We also have Cameron too who signed a 2 year extension to his contract so it’s really hard to say. Fletcher was not really a player we actually needed.

Do you think Stoke are going for the cheaper options this season?

Adam: It certainly looks that way however we have been one of the lowest spenders over the last few seasons anyway.

And finally, where do you think Stoke need to strengthen?

Adam: Full backs, a central defender and a box to box midfielder essential. Then we need to start Bojan again to link up with Berahino.

We would like to thank Adam his time to do this short interview with us here at Football Faithful.