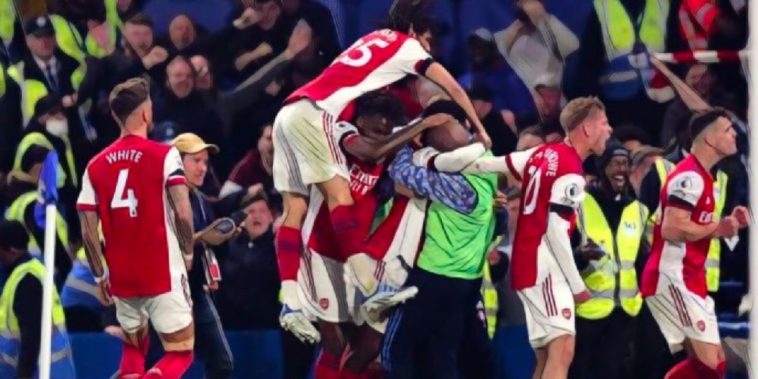 Arsenal came into the game on the back of three successive league defeats to see them slide out of the top four spaces, but took the lead in the 13th minute. Eddie Nketiah capitalised on a woefully under-hit backpass from Andreas Christensen, the former Chelsea youngster seizing on the ball, taking a touch to beat Malang Sarr before slotting past Edouard Mendy for his first Premier League goal of the season.

The lead would last just four minutes though, Chelsea pinching the ball in the Arsenal half before Timo Werner’s tame effort took a decisive deflection off the heel of Granit Xhaka, the midfielder turning his back on the ball as the German struck.

Emile Smith Rowe scored the winner in this fixture last season, and in the 27th minute, the midfielder restored Arsenal’s lead as he rolled the ball beyond Mendy from 18 yards following a swift counter attack from the Gunners that saw Bukayo Saka and Martin Odegaard heavily involved.

However, just five minutes later and Chelsea were level again. Timo Werner dispossessed Ben White high up the pitch before Mason Mount took control of the ball. He whipped a cross in from the left, with Cesar Azpilicueta getting across his man to poke home from inside the area.

Arsenal regained the lead 11 minutes into the second half, and once again another misplaced pass was pounced upon by the visitors, Nuno Tavares found Nketiah in the middle before the 22-year-old had a couple of opportunities before eventually poking the ball beyond Mendy following some really poor defending from the hosts.

Both sides had chances to add to the goalscoring in what was an end-to-end encounter at times, and as the game ticked into added time, Arsenal would be awarded a penalty to make sure of the points as Azpilicueta had a hold of Saka in the box. The England forward was abused after he missed from the spot in the Three Lions Euro 2020 final defeat, though he stepped up and coolly despatched from 12 yards this time around, much to the delight of the amassed Gunners faithful behind the goal.

2 – Emile Smith Rowe and Bukayo Saka have both scored 10+ goals in the Premier League this season; just the third time two players aged 21 or under have done so for the same team in a campaign (Bridges & Kewell for Leeds in 99-00, Rooney & Ronaldo for Man Utd in 06-07). Jewels. pic.twitter.com/CeVp9fzTmX

The victory ends Arsenal’s run of three successive defeats and moves them level on points with fourth placed Spurs,

“No, [I didn’t expect that], but these London derbies are like that,” he told Sky Sports.

“The way they started the game, it was tactically demanding. They constantly changed the shape and positioning and we had to adapt. We managed to grab a little bit of the game and we looked dangerous all the time on the counter. When arriving in the final third we always looked a threat. Scored four goals, conceded two. After two difficult weeks, it’s a great day.

“We were expecting a lot of changes [of formation during the game], we had to have the flexibility so we had to have the personnel to be flexible and adapt and change things that would work in our favour, and it was demanding for the players to understand a few things, but they did it very well.”

Asked on his thoughts on Eddie Nketiah’s performance, he said: “What I’ve been saying all the time about Eddie. When you look at him in training, how he behaves, how humble and hungry he is at the same time. Good things happen to good people, the same as Rob Holding and Elneny. When you see the training session they did on Sunday after we lost against Southampton, this is why we won the game today in my opinion.”

“He (Nketiah) has proven [his commitment] all season and he hasn’t given any signs of anything different, so, if I’m happy for someone, it’s especially him because I know what he has been through.”

Having twice been pegged back in the first half, the Spaniard was asked about his half-time message to his players.

“That we have to stay in the game and that the game was there for the taking,” he said. “The shape that they were playing had a lot of risk as well, there were a lot of spaces and we have to improve in one or two things that we weren’t doing well enough, but the game was there [to be won], and we knew physically that they played two days ago and we could end up on top of that in the second half.”

“What I love is the spirit of these players. When you lose matches, you get punished and criticised, but for these players, I don’t care, because they are so worth it. They are phenomenal people and as a group they are really growing.

“I think [this result] will help because it gives confidence and belief on the biggest stage, away from home against the top teams.”