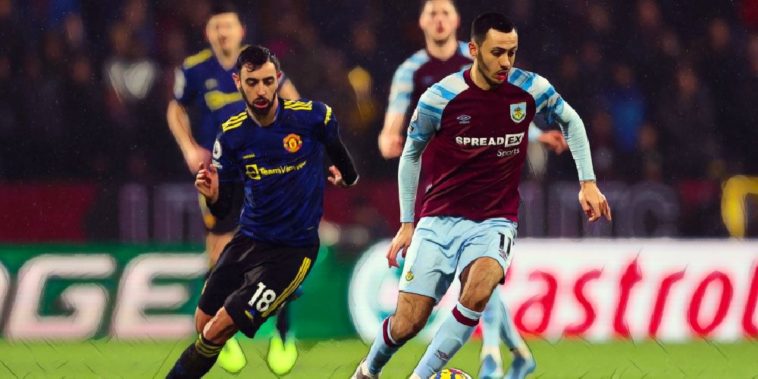 Manchester United’s pursuit of a top four spot took yet another knock after they were held to a 1-1 draw on a blustery night in Burnley.

United were knocked out of the FA Cup on Friday evening in a game that saw Middlesbrough awarded a hugely contentious goal to level the scores, and in the 13th minute, the Red Devils would again be on the wrong end of a VAR decision. A Bruno Fernandes free-kick was despatched by a wonderfully guided header by Raphael Varane, though it would eventually be ruled out for offside following a block by Harry Maguire on Jay Rodriguez who was adjudged to be interfering with play.

They would, however, swiftly get themselves in front just minutes later, Marcus Rashford feeding the overlapping run of Luke Shaw, the left-back cutting back from the byline to find Paul Pogba 12 yards out who made no mistake as he lashed his first-time finish into the roof of the net.

United had another ruled out in the first half as Pogba was harshly judged to have fouled Erik Pieters before Bee Mee eventually put the ball past Nick Pope following a delivery from Rashford.

United had exerted plenty of dominance in the first half and wasted a number of other presentable opportunities, though Burnley came out with far more intensity after the break, and hauled themselves level within four minutes of the restart.

January signing Wout Weghorst played a lovely reverse pass to find the perfectly timed run of Jay Rodriguez, the 32-year-old getting in behind Harry Maguire before beating David de Gea at his near post.

The away side work their way down the left brilliantly, before an emphatic finish from the Frenchman! ⚽ pic.twitter.com/eCXlwwwF35

Both sides had chances to grab a winner in what was a fairly entertaining game for the neutrals, though in the end it finished all square, with United having now dropped 11 points from winning positions this season.

Speaking after the game, interim boss Ralf Rangnick was pleased with this side’s first-half display, but said they lacked aggression in the early stages after the break, while calling the decision to rule out Ben Mee’s own goal ‘soft’.

Asked by BT Sport if his side lacked killer instinct in front of goal, Rangnick said: “We scored three goals. The second one that was disallowed, the linesman flagged foul but 10 seconds after that incident. This was a very soft decision I must say.

“Again we played an excellent first half. We controlled and dominated the game. We scored the three goals but two were disallowed.

“In the second half we were not aggressive enough. It was clear they would come out and be aggressive. The way we allowed them to score, we didn’t defend the whole situation.

“A frustrating night for us because we should have won that game comfortably.

“In the end it was also a little question of luck. One point for a performance like this is just not enough.”

The result, combined with West Ham’s 1-0 win over Watford, leaves United in fifth in the Premier League, with a home game against Southampton on Saturday up next for the Old Trafford outfit.