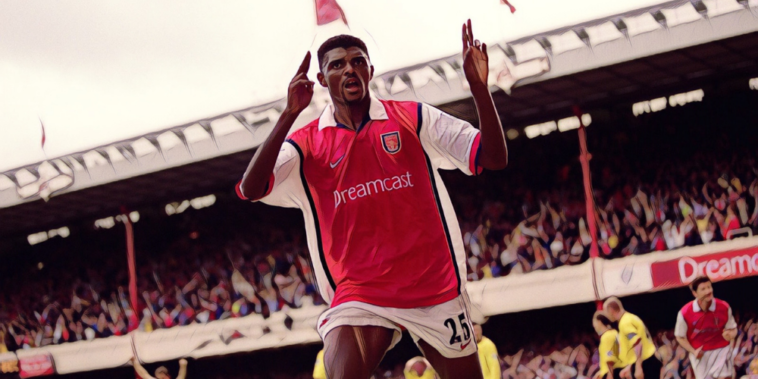 African football’s finest are amongst the most celebrated names in the modern game, with almost each of Europe’s elite possessing talent from the continent.

For decades Africa was an untapped resource for the world’s biggest clubs, however, the pathway for players needing a select group of trailblazers across Europe’s most respected domestic leagues.

Amongst them was the Nigerian national treasure that is Nwankwo Kanu.

Kanu’s career saw him lead Nigeria to success on the international stage, win European honours and overcome a career-threatening medical issue to cement his status as a cult figure in the Premier League.

His rise began at Nigerian side Iwuanyanwu Nationale where a splurge of goals earned him a Nigerian Premier League winners’ medal and inclusion in the national side at youth level, forming part of a talented team that travelled to the u17 World Cup in 1993.

The tournament saw Kanu shoot to prominence, as he hit a hat-trick in the opening fixture as Nigeria thrashed Canada 8-0. Nigeria then dismantled Argentina 4-0 in their next fixture and progressed without conceding a single goal, their talismanic forward netting five times in three group fixtures.

Nigeria ended the tournament as winners after beating Ghana in the final and, alerted to the talent within the nation’s ranks, European clubs began to circle.

Ajax won the race to sign Kanu and the teenager found himself in the midst of a revolution in Amsterdam. The mid-nineties saw Ajax win three consecutive Eredivisie titles, with the second of those coming in unbeaten fashion as Louis van Gaal’s side conquered all before them.

Kanu contributed 12 goals in all competitions during the side’s historic 1994/95 season, as Ajax became the first, and so far only, side to win both their domestic league and the Champions League without losing a single game.

Kanu scored 27 goals in 74 appearances for Ajax but remained with the Dutch side for just three seasons, as Inter Milan secured his services following the forward’s exploits in the 1996 Olympics.

The Super Eagles won gold in Atlanta, with Kanu starring alongside the likes of Jay-Jay Okocha as Nigeria upset the odds – and South American superpowers in Brazil and Argentina – to be crowned champions.

He was the hero of the semi-final win over Brazil, scoring an inventive last-minute equaliser as the west African side came from 3-1 down to force extra-time, before a driven strike secured a thrilling Golden Goal victory for Nigeria.

The move to Inter Milan proved perhaps the first real disappointment of Kanu’s career. Diagnosed with a serious heart defect soon after his arrival, there were fears that the forward’s promising career was already over.

He underwent successful surgery to replace an aortic valve and spent an extended period on the sidelines, before returning to action in April 1997. Kanu failed to make an impact in Italy, however, scoring just one goal and making only twelve league appearances during his time at the San Siro.

In search of further firepower, Arsenal gambled on the services of Kanu and it was a roll of the dice that soon paid dividends for the North Londoners.

From a car park to 'Kanu believe it!?'

This is the story of how Kanu became a Gunner 🎬 pic.twitter.com/dVnIGXrxC1

Arsenal had previously had success in bringing the likes of Dennis Bergkamp and Patrick Vieira to England, two names who has struggled in Serie A before becoming leading lights in London.

Kanu spent five seasons with the Gunners and became a cult figure during his time in the Premier League, his mix of unpredictability and audacity making the Nigerian a firm favourite at Highbury.

His habit of scoring as a substitute endeared him further, with his first months in England including a succession of goals off the bench. One such effort arrived in a North London derby win at Tottenham, as Kanu – receiving the ball with his back to goal – nonchalantly used his long legs to flick the ball over Luke Young before firing home Arsenal’s third at White Hart Lane.

There was another wonderful goal at Middlesbrough as Kanu found his feet in an Arsenal shirt, a brilliant back-heeled effort as part of a brace as Arsenal hit six at the Riverside.

Kanu’s first full season proved his most productive with Arsenal as he scored 17 goals in all competitions, including scoring a stunning hat-trick against Chelsea in one of the Gunners’ great individual performances of the Premier League era.

Arsenal had been heading towards defeat after finding themselves two goals down at Stamford Bridge, with goals from Tore Andre Flo and Dan Petrescu having given Chelsea a commanding cushion as the capital derby entered the final fifteen minutes.

Kanu prodded home a first to give the Gunners a glimmer of hope, before a heavy touch and low finish looked to have rescued his side a dramatic point.

The best, however, was still to come as Kanu snatched a stoppage-time winner with a goal wrapped in the bamboozling balanced brilliance of Nigeria’s national hero.

Having charged down Albert Ferrer’s attempted clearance, the forward set off in pursuit of the loose ball down the touchline. Faced with Ed de Goey following his rash decision to rush out and close the space, the forward skipped round the goalkeeper on the byline, with a cross looking the most logical outcome.

Ignoring overtures from Marc Overmars and Davor Suker on the edge of the area, he instead opted to shoot, arcing a finish from an improbable angle beyond the retreating blue shirts to stun Stamford Bridge.

Kanu’s goals were regularly celebrated with a two-fingered salute, a trademark he later revealed was an ode to the club’s Gunners nickname as his popularity continued to swell in the capital.

There was an elasticity about the way his long limbs manipulated the football, somehow contriving to appear both gangly and graceful at the same time. Laid back to the point of being horizontal, his nonchalance transferred to Premier League pitches as he waltzed through games in his signature languid manner, flickering into life momentarily when around goal.

His goals were infrequent but often proved memorable, with the forward forming part of the squad that won two Premier League titles and two FA Cups during the early noughties. The latter league success came in unbeaten fashion, making Kanu an ‘Invincible’ in two different European leagues.

He scored 44 goals in 198 appearances for Arsenal before being released following their 2003/04 title success, moving on to West Bromwich Albion for a largely underwhelming two-season stint at The Hawthorns.

Portsmouth signed the forward on a free transfer following his exit from West Brom and he recaptured some of the old magic on the South Coast, scoring 12 goals in all competitions during his debut campaign to earn an extension to his initial one-year deal.

His second season saw him write his name into the club’s folklore, as Kanu’s decisive contributions saw Portsmouth win the FA Cup – their second success in the competition and first since 1939.

Kanu scored the winner in the semi-final win over former side West Brom, before repeating the trick as Cardiff were beaten at Wembley, reacting quickest to a rebound to turn the ball past Peter Enckelman for the game’s only goal.

It was the highlight of his final spell in club football, retiring following Portsmouth’s tumble towards the third tier as the club endured financial issues.

His club career ended in less glamorous settings than where it had reached its peak, but Kanu left a legacy that ensured he remains Nigeria’s most celebrated footballer, having scored 12 goals in 82 caps for the national side and been the figurehead of their Olympic success.

He is one of just nine players to have been named African Footballer of the Year on more than one occasion, following his first award in 1996 with a second three years later as the beaming smile of Kanu became a familiar one to Premier League fans.

His bandy-legged brilliance means he will always have a special place in the minds of Arsenal fans, a footballer whose nimble footwork and enigmatic unpredictability so often perplexed Premier League defences. .