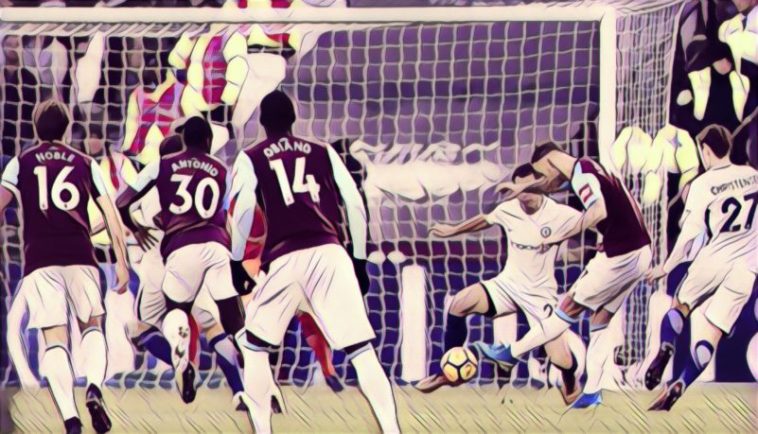 West Ham manager David Moyes got a much needed first win against Chelsea at the Olympic Stadium earlier today. The Hammers scored early goal through record signing Marko Arnautovic, and then defended brilliantly to deny the reigning Champions and run out 1-0 winners. Let’s see how the players rated …

Got the nod ahead of Joe Hart and dealt with everything that can his way.

A absolute rock. Headed, blocked and tackled his heart out all game.

Like his central defensive partner, put in a huge shift.

Solid performance by the England international.

Defended really well and got forward whenever he got the chance.

Broke up play brilliantly in the middle of the park.

Neat and tidy in possession. His experience was crucial as his side held onto their lead late in the game.

Chelsea just couldn’t get the ball of him at times. Looks really good in left-midfield role.

A couple of nice runs and touches, put in the hard yards when needed aswell.

Cracking finish for his first West Ham goal. Is starting to win around The Hammers faithful.

A workhorse. His power and pace caused Chelsea problems all day.

His fresh legs helped his side in the closing stages.

Worked hard after his introduction.

No chance with goal, but a little sloppy on the ball at times.

Not as sharp as usual in defence or on the ball.

Has been really good this season, but should have done better for West Ham’s goal.

Looked off the pace and so often slows his sides play down due to his limited ability in possession.

Poor. Had a huge amount of the ball out wide and failed to put any quality into the box.

Looked like the man most likely to hurt West Ham, just not his day in the end though.

Burst forward well at times, and probably his sides best player on the day.

Looks like he is still adapting to the Premier League, needs to improve quickly.

Taken off early due to being on a yellow, had not done much up until then.

Nowhere near his brilliant recent form. Just couldn’t get into the game.

Missed a big chance with 10 minutes to go, and was well marshalled by the Hammers defence for the most part.

Brought on at half-time to improve his sides attacking threat, but failed miserably.

Looked dangerous down the right after coming on, probably should have been introduced earlier.

An improvement on Zappacosta at right-wing back, but that really wouldn’t be hard.