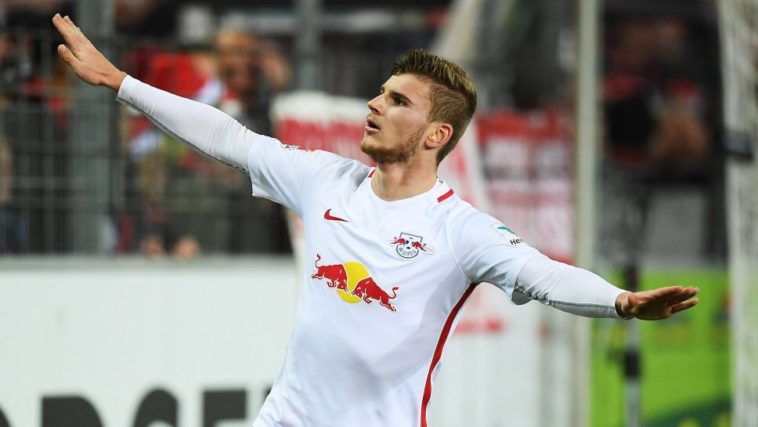 Germany striker Timo Werner has talked of his desire to move to a big club, including six Premier League teams, as he continues his impressive goal scoring record.

The RB Leipzig forward fired 25 goals in just 32 appearances last season as he helped his team to the most unlikeliest of second place finishes in the Bundesliga and to Champions League qualification. He has continued his goalscoring form into this season, scoring four goals in four games for his club, while also scoring six International goals since June.

This has seen the striker linked with a number of club, and he has not been shy to say that he wants to play for one of the biggest clubs in Europe.

“So far, I have progressed very well with Leipzig.

“That is why I do not think what is ahead in one, two or three years.
Of course I want to play at a big club. But, we have not yet come to terms with the development at Leipzig. Perhaps RB will be a big club too – I’m quite sure.

“In Spain there are a maximum of three clubs with Barca, Real and Atletico Madrid. In England there are a few more: Arsenal, Chelsea, Tottenham, Liverpool, Manchester United and Manchester City.

“FC Bayern is also a big club, but for me it is not a topic that I am concerned with.”

However a move for Werner will not come cheap. RB Leipzig showed their strength by rejecting bids of up to £75m from Liverpool for Naby Keita, but with Werner having no release clause, and three years remaining on his current deal, they feel like they are in complete control of the situation.

Real Madrid have been most heavily linked to the 21-year-old while a number of Premier League clubs also monitor his progress.

A player that looks to have an enormous future as a top striker, and whomever lands him eventually will doubtlessly reap the benefits of his obvious talent for scoring goals.