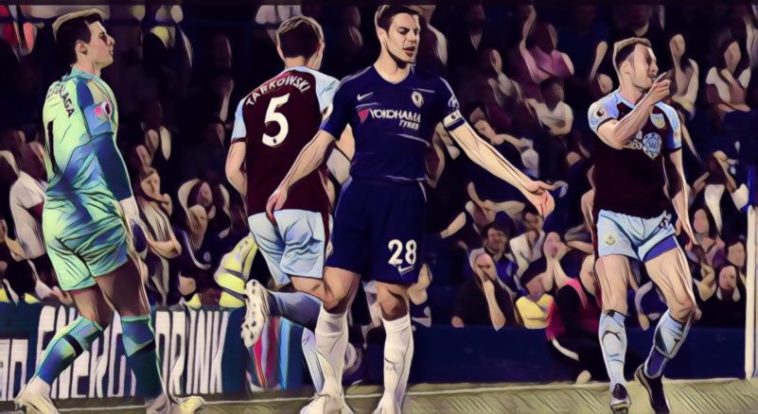 Chelsea failed to fully capitalise on slip-ups by their top four rivals over the weekend, drawing 2-2 with Burnley tonight at Stamford Bridge.

The Blues started brightly as they looked to take advantage of Arsenal, Spurs and Manchester United all losing their most recent games, although Maurizio Sarri’s side fell behind after just eight minutes when Burnley midfielder Jeff Hendrick smashed a volley past Kepa Arrizabalaga from the edge of the area.

However, within six minutes Chelsea had wrestled back control through strikes from N’Golo Kante and Gonzalo Higuain, only for Ashley Barnes to equalise for the Clarets after 24 minutes.

Chelsea pushed and probed throughout the second period, but they were unable to break down a resolute Burnley defence and it finished honours even in west London.

Blues boss Maurizio Sarri and his staff were unhappy with what they perceived as negative tactics from Burnley, and assistant coach Gianfranco Zola admitted as much after the game.

“We wanted to win. They didn’t want to lose,” Zola told BBC Sport.

“We are unhappy. There was too much time wasting. Five minutes injury time wasn’t enough to compensate. We couldn’t build important rhythm.

“We were hoping for something more. We are determined to fight until the end. This team are playing good football. We need to improve but we’re in a good way. We care as we showed today.

“We expected it to be a tough game. We didn’t expect so much time wasting. We expected Kevin [Friend, referee] to give more extra time. That’s why we’re very unhappy.”

Tensions boiled over at full time with a scuffle breaking out in the tunnel, while Sarri was sent off by referee Kevin Friend for leaving his technical area.

Zola though insisted that Sarri had only left his area to try and calm down an on-pitch melee, and revealed that the Italian coach was upset by how Friend handled the situation.

“He was very upset because he has heard not good works towards him from the Burnley bench. The only reason he walked over there was to get our players to go into position, he was trying to help the ref. Kevin [Friend] misinterpreted. I’m disappointed, he wanted to help him.”

Chelsea moved into fourth place after tonight’s draw, although they have played a game more than their rivals.