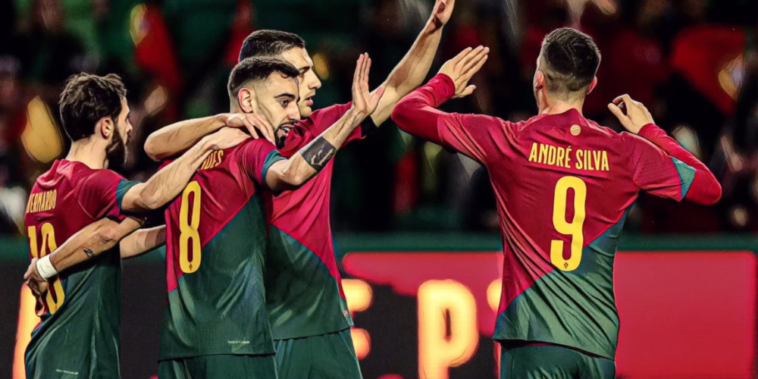 Ahead of the tournament we’ve previewed each of the competing sides, here are the nations in Group H – Portugal, Ghana, Uruguay and South Korea.

Cristiano Ronaldo will captain Portugal in his fifth World Cup, as the five-time Ballon d’Or winner looks to add football’s biggest prize to the European Championship and Nations League titles already won with his country.

Ronaldo remains the lead figure in a talented team, though arrives in Qatar far from peak condition after a turbulent start to the season at Manchester United, one amplified by that controversial interview that looks set to end his second spell at Old Trafford.

Portugal is filled with some tasty talent 🥵🌟 pic.twitter.com/xF1vVnNCDX

Fernando Santos will build his attack around international football’s greatest goalscorer, with Portugal’s cast of creative talent a formidable one. Rafael Leao was named as Serie A’s Most Valuable Player last season at AC Milan, while Bernardo Silva boasts a mix of industry and invention that few others can.

Bruno Fernandes’ goalscoring form has also been a bonus. The midfielder had a slow start to his international career, but has five goals in nine caps this calendar year, including a double in the playoff win against North Macedonia.

Further back, a decision must be made on whether the veteran Pepe partners Ruben Dias at centre-back. Uncapped teenager Antonio Silva is pushing the 39-year-old for a place in the side.

Ghana are the lowest-ranked team in the competition as the World Cup begins this weekend, sitting a lowly 61st in FIFA’s rankings.

The Black Stars have been far from convincing in recent performances, disappointing at the AFCON with a winless campaign that saw Ghana crash out bottom of the group. Otto Addo’s side have won just three of their 14 games this calendar year, with only one of those – a 2-0 victory against Switzerland this month – coming against a side ranked inside FIFA’s top 100.

A tough group has further tempered expectations, but there is talent in the Ghana side. Thomas Partey headlines their squad and will be looking to continue his fine form for Arsenal in Qatar, while Mohammed Kudus is a player who has attracted interest from England. The 22-year-old shone for Ajax during this season’s Champions League group stage with four goals.

Ghana’s options have also been boosted after Inaki Williams declared to represent the African side. Williams earned one senior cap for Spain in 2016, but changed allegiance earlier this year after failing to make a competitive appearance for La Roja.  The 28-year-old’s younger brother, Nico, is a part of Spain’s squad and scored his first international goal this month.

Uruguay ended South America’s qualification campaign third, behind the unbeaten duo of Brazil and Argentina. La Celeste last impacted the latter stages of a World Cup in 2010 with a run to the last four and there’s the foundation of a side capable of a strong campaign in Qatar.

The veteran forward duo of Luis Suarez and Edinson Cavani have been joined by Darwin Nunez, who despite the scrutiny of spotlight at Liverpool has found his feet in recent weeks. The 23-year-old has eight goals in ten starts for the Reds this season and provides the pace and power to complement Uruguay’s ageing icons.

Are Uruguay dark horses for the World Cup? 👀 pic.twitter.com/6NkPODI4Qz

Diego Alonso also boasts a midfield packed full of technique and tenacity. Sporting Lisbon’s Manuel Ugarte is a ball-winning machine, while Rodrigo Bentancur and Fede Valverde have become irreplaceable to Spurs and Real Madrid respectively. The latter has taken his game to new levels this season, emerging as one of the most influential midfielders in Europe.

Barcelona centre-back Ronald Araujo has been included in the squad, despite not featuring for his club side since September.

South Korea will compete in a tenth straight edition of the World Cup, having eased through Asia’s qualification process. Paulo Bento’s side conceded just four goals in 16 fixtures across the two phases of qualifiers.

The defensive strength of the side is built around Kim Min-Jae, who has had a major impact since leaving his home continent for Europe in 2021. After an impressive debut season for Fenerbahce, he signed for Napoli last summer and has gone from strength to strength.

The centre-back has been the cornerstone of a side that top Serie A and breezed into the Champions League’s knockout rounds, with his performances already understood to have attracted interest from Europe’s wealthiest sides

Son Heung-Min is the poster boy of South Korean – and Asian – football, however. The Tottenham star has 35 goals for the national side and will be looked at to make a decisive contribution in Qatar. Wolves’ Hwang Hee-Chan will provide support in attack.

Since reaching the semi-final on home soil in 2002, South Korea have progressed from the group just once in four attempts.