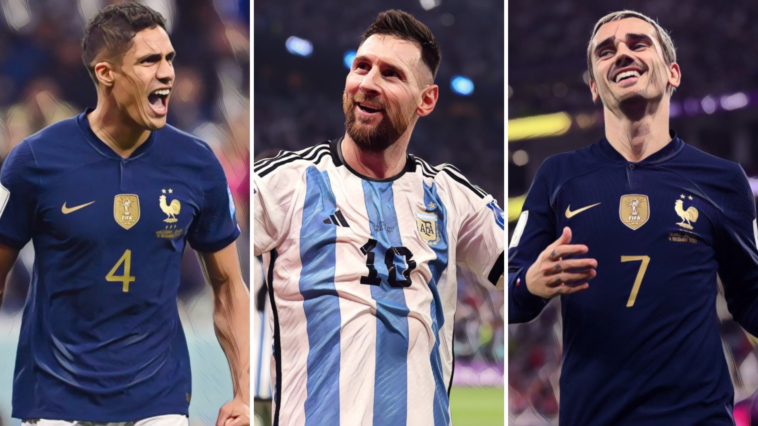 Argentina take on France in football’s biggest fixture this week, as two proud footballing nations face off in the FIFA World Cup final.

It’s a final with no shortage of narratives, as Lionel Messi looks to win the World Cup for Argentina, against a French team out to make history with back-to-back successes on the world stage.

Ahead of the clash we’ve looked through the star-studded squads of both nations and compiled our World Cup final combined XI.

Hugo Lloris has come to the fore during the World Cup’s knockout rounds, following a fine performance against England with another strong showing to thwart Morocco in the semi-finals.

Lloris used all his experience to make a huge first-half save from Jawad El Yamiq and another to deny Azzedine Ounahi as France reached the final. The veteran became France’s all-time record appearance maker in the last eight and could now become the first man to captain his nation to two World Cup successes.

He edges out Emiliano Martinez, who is in the running to add the World Cup’s Golden Glove to the Copa America award he won in 2021.

Nahuel Molina’s star is on the rise after an impressive tournament for Argentina to date, making a mockery of suggestions that full-back was an area of weakness for La Albiceleste.

Molina – who signed for Atletico Madrid from Udinese during the summer – has been a marauding and tenacious presence down the right flank, scoring his first international goal during quarter-final win over the Netherlands.

His lung-busting run forward led to Julian Alvarez’s goal in the semi-final win against Croatia and Chelsea are rumoured to be among the clubs who have been impressed with his performances in Qatar.

Raphael Varane feared his World Cup dream was over after sustaining a hamstring injury less than a month before the finals, but returned for France’s second game of the tournament and has been a fixture in the side since.

Varane has been there, done it, and got the medals to prove it, with the centre-back looking to become a two-time world champion in Sunday’s final. The elegant defender has an enviable collection of major honours, having lifted three La Liga titles and four Champions League trophies with Real Madrid, in addition to World Cup success with France in 2018.

📆 22nd October: Raphael Varane leaves the pitch in tears with a hamstring injury

He made his World Cup dream happen ✊#FIFAWorldCup #Qatar2022 pic.twitter.com/8pRhiuaK9g

Ibrahima Konate was called into the France squad despite a disrupted start to the domestic season and the Liverpool defender has repaid the faith of Didier Deschamps in Qatar.

Konate has started three games for Les Bleus, with his average of 6.9 tackles and interceptions per 90 minutes the highest total at the 2022 World Cup of players with 3+ starts.

The 23-year-old has been a colossal presence for the French and no player with 10+ duels can better his 95.3% success rate, having lost just one of the 22 duels he has contested in Qatar.

◉ Most interceptions (5)
◉ Most clearances (4)

Outstanding in the semi-final win over Morocco after replacing Dayot Upamecano, he will hope to have done enough to earn a starting place in Sunday’s final.

Theo Hernandez has been the beneficiary of cruel luck for brother Lucas, whose injury in the opening fixture has provided his younger sibling with a prominent role in France’s campaign.

The left-back has shone since coming into the side, providing two assists and scoring the opener as Morocco were beaten in the last four.

Hernandez has been named in the Serie A Team of the Season for three consecutive campaigns in Italy, with AC Milan teammate Rafael Leao lauding the 25-year-old as the ‘best left back in the world’ this week.

He has now been directly involved in eight goals in just 12 appearances for Les Bleus.

Aurelien Tchouameni headed into the tournament with the task of replacing France’s World Cup-winning midfield of four years ago, with N’Golo Kante and Paul Pogba each ruled out of Les Bleus’ defence in Qatar.

The midfielder has shone despite his relative inexperience at this level, producing a number of mature performances during France’s run to the final. Assured in possession and intelligent in his recovery of the ball, he scored the opener as England were beaten in the quarter-finals with a fine strike from the edge of the area.

Stepped up in a big way. 💪#FIFAWorldCup pic.twitter.com/r44X5Ugdet

A summer move from Monaco to Real Madrid has lifted the level of Tchouameni and France are feeling the benefits in Qatar.

Enzo Fernandez has enhanced his growing reputation during the World Cup, emerging as a central figure during Argentina’s route to a sixth final.

Fernandez was linked with a move to the Premier League before signing for Benfica last summer and there will be a number of clubs cursing their decision not to pursue the 21-year-old earlier. After coming off the bench to score a sublime goal in the group stage win over Mexico, Fernandez has been at the heart of Argentina’s run through the knockout rounds.

Creative and classy whether stationed as a number six or eight, Liverpool are said to be chasing a deal to sign the player, who has a €120m release clause in his contract in Lisbon.

Having arrived for just €18m last summer, Benfica will receive a huge profit on the player should he leave. He has proven in Qatar that he is capable of influencing games of the very highest level.

If it is the name of France that is etched onto the World Cup trophy this weekend, few will have had as great a contribution to their success as Antoine Griezmann.

The leading scorer at Euro 2016 and Silver Ball winner at the World Cup two years later, Griezmann has so often delivered in major finals for the French. In Qatar he has been sublime, revelling in a new midfield role with his creativity having filled the absence of Paul Pogba and Karim Benzema.

At times, Griezmann has appeared everywhere. He’s hustled on the edge of his own box, won tackles, pressed opponents, and carved out chance after chance in the final third. No player has created more chances in Qatar and none have supplied more assists.

Griezmann has long been one of the best forwards of his generation and in Qatar is shining as one of the best midfielders. A footballer of incredible intelligence and a candidate for Player of the Tournament.

Fairytales are not often written in football, but a first draft has been sketched for one in Qatar.

In what will be his final World Cup fixture, Lionel Messi has another chance at the biggest prize. His role in Argentina’s run has been remarkable, with the seven-time Ballon d’Or winner rolling back the years on occasion.

He is the tournament’s joint-leading scorer and joint-leading assist provider, the leader of an Argentine band of brothers who seem hell-bent on helping a national icon to football’s most prestigious award.

Lionel Messi even has Brazil legends coming out to support him 😁 pic.twitter.com/x9ArrWOnrK

Even in what is undoubtedly the twilight of a career we’re unlikely to ever see repeated, the old magic of Messi remains.

Perhaps the biggest obstacle to Messi’s date with destiny comes in the form of Kylian Mbappe. His club teammate at Paris Saint-Germain leads the race for the Golden Boot alongside the Argentine, with five goals during France’s run to the final.

Mbappe will feature in his second World Cup final aged just 23, while he now has nine career goals in the competition. Just one Frenchman – the legendary Just Fontaine – has ever scored more.

Explosive and exhilarating when operating at full throttle, he has been quieter since scoring twice in the last-16 win over Poland. Ensuring he remains quiet will be key to Argentina’s hopes of being crowned champions.

Kylian Mbappe will play his second World Cup final at the age of 23 ✌️ pic.twitter.com/mrhKFIHZX1

Julian Alvarez deserves huge credit for his emergence from the shadows to spearhead Argentina’s challenge, but it’s Olivier Giroud who leads the line in our combined side.

Now France’s all-time record goalscorer, he has four goals in five appearances in Qatar and has risen to the occasion in the knockout rounds, scoring a crucial quarter-final winner against England.

Giroud was not expected to play a prominent role until Karim Benzema’s injury thrust him back into the side, but is now on the verge of back-to-back World Cup successes.