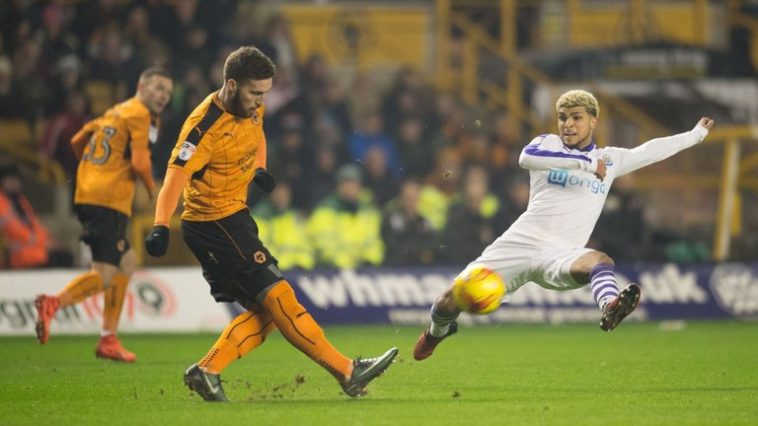 The spirits were high at Newcastle United following a crucial 1-0 victory against Derby in their last fixture. The Magpies entered the game with the most impressive away form in the league whilst Wolverhampton Wanderers were keen to improve their home form. Paul Lambert was ready to try and bounce back from that 2-1 defeat to Burton Albion last week.

Skipper Jamaal Lascelles returned to the line-up for the away side, replacing Grant Hanley, after recovering from his minor groin strain. Isaac Hayden was dropped to the bench for Jack Colback, who was also returning from injury. Rafael Benitez was still without top scorer Dwight Gayle available for discretion so Serbian striker Aleksandar Mitrovic retained his place over Daryl Murphy.

The hosts also made two changes as Danny Batth came in for Kourtney Hause and Jack Price replaced Lee Evans. David Edwards featured once again trying to add to his great goalscoring tally this campaign. Promising youngster Bright Enobakhare and club record signing Helder Costa started in an attempt to provide the creativity for striker Nouha Dicko. The Mali international was looking for his first goal since returning from his ACL injury that side-lined him for over a year.

The first chance of the game fell to Newcastle in the opening minutes; Matt Ritchie played a dangerous ball beyond the defence into Jack Colback. The player had a great opportunity to silence the home supporters in the early stages but his end product was poor as he placed it straight into the arms of Carl Ikeme, it was a let off for the team in orange.

Newcastle’s target man, Aleksandar Mitrovic, committed a few fouls in the first half. However the Serb was unfairly penalised when Richard Stearman jumped onto his back and fell onto the ground. It was Stearman who had the best chance for Wolves in the first half when he got himself on the end of Helder Costa’s inviting free-kick. The current loanee from Fulham could only put his effort over the bar. It was a head in hands moment for the defender.

Jonjo Shelvey suffered a horrendous reception from the home fans because of the incident between him and Romain Saiss, which earned Shelvey a five match ban. The midfield maestro sent a cross field pass to Mitrovic. The striker made a 50/50 challenge with goalkeeper Ikeme to get the ball. When the pair collided, Mitrovic caught Ikeme on the leg. The home crowd demanded that Mitrovic was sent off but referee Craig Pawson made the correct decision in keeping the Serbian international on the pitch. This also infuriated commentator Don Goodman; the former Wolverhampton Wanderers player strongly felt that he should have been shown a second yellow card. 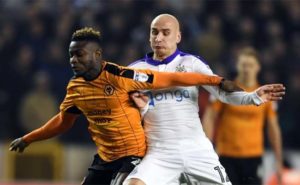 Minutes later came the first goal of the game. Mo Diame’s optimistic strike was deflected into the path of Jamaal Lascelles. The centre half quickly manoeuvred his feet and flicked the ball onto Aleksandar Mitrovic. It was an easy tap in for Mitrovic who broke the deadlock in added time of the first period. Some say Mitrovic shouldn’t have been on the pitch to score but personally I think it would have been very harsh to send off the twenty two year old.

At half time, Christian Atsu came onto the pitch for Mitrovic. It was clear to see that Rafael Benitez feared that the striker would potentially be shown red if he continued to play in the second period.

It was an immensely boring affair in the second half as Benitez changed his tactics and set the team out after the break to sit back and counter attack when the right opportunity came. Time and time again the forward line of Wolves failed to get past the partnership of Ciaran Clark and Jamaal Lascelles.

David Edwards thought he had levelled the score at last only for him to see his header fire off the side netting. Cheers echoed Molineux until there was an abrupt silence when the supporters discovered that Edwards did not hit the target.

In stoppage time, there were shouts for a penalty from the home team; they felt Jamaal Lascelles handled the ball when Dicko tried to control the ball. Instant replays showed that the ball hit the player’s hand very suddenly and that his hand was not in an un-natural position.

The Geordies were once again thrilled to have overtaken Brighton at the top and are awaiting their next challenge, an away encounter with in form Norwich. The canaries will be ready to give Newcastle payback for their late win against them in the reverse fixture.