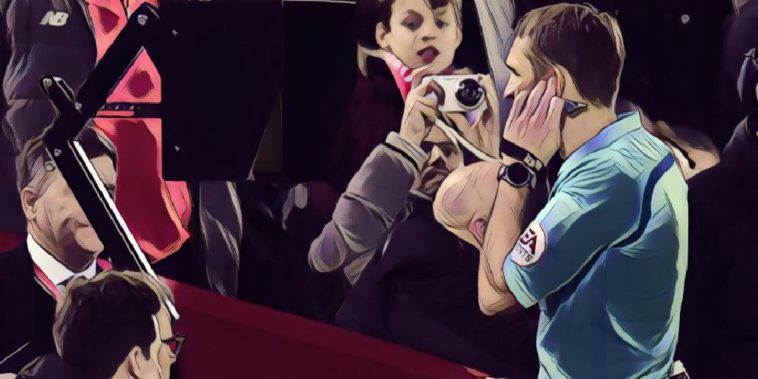 The Video Assistant Referee (VAR) system promises the end of human error in football officiating, and this is undoubtedly something that would benefit the sport. We’ve had three yellow cards issued to the same player in the World Cup, a ghost goal in the Bundesliga, and a case of mistaken identity in the Premier League – it’s only a matter of time before another referee mistake ruins a World Cup or Champions League Final. Eradicating unjust Hand of God-esque moments is something I’m sure we can all get behind.However, as it currently exists, the VAR system is a blight on the selection of leagues that FIFA has chosen to be the lab rats on which to test its half-baked creation.

Officiating in football is inherently subjective. Apart from decisions relating to whether the ball crossed the goal/side line (for which we have goal line technology), having a VAR does not guarantee that the most correct decision will be made every single time.

You can watch Virgil van Dijk’s now-famous tackle on Erik Lamela from two different angles and come to completely different conclusions as to whether or not it was a penalty – assuming you’re impartial!

Here’s the view from the goal line:

And now an aerial viewpoint:

It doesn't look like it from the front angle but from behind you can clearly see Van Dijk's foot make contact with the back of Lamela's knee. pic.twitter.com/Q2dMp46Fk9

It’s obvious Lamela tried to fall over. But without actually being on the pitch, an observer can’t tell whether van Dijk actually impacted Lamela’s knee with force, or whether he was withdrawing his kick, resulting in a soft touch or no contact at all.

Even if you’d been trained at FIFA’s new VAR training centre in Italy, you wouldn’t have been able to make a call that would have satisfied both teams in this situation.

Since their ruling will always be subjective, managers, fans and players have room to criticise the VAR when it makes a call against them.

Essentially then, we’re back at square one. When a tight call is made, the team that the decision goes against will feel that it was unfair, which is exactly what happens when it’s just the referee out there.

However, the VAR is great for situations when the ref messes up completely, like when Andre Marriner sent off Kieran Gibbs against Chelsea after Alex Oxlade-Chamberlain tried to save a shot with his hand. Correcting massive errors is obviously a good thing, but it raises another serious issue with the VAR.

There’s something else we’ve got to consider – the issue of authority.

In Australia’s A-League, Newcastle Jets manager Ernie Merrick said that the VAR had “killed” an exciting game against the Western Sydney Wanderers after it awarded a dubious penalty against his team.

“And it got to the stage where I was wondering who the referee was – the person in the middle of the park or the guy in the VAR”.

Ernie makes a good point. As a former referee, I can tell you that feeling in control of the match is crucial in maintaining your confidence as a ref.  That’s why you’re told to use your whistle sparingly – to make sure it still has an effect when you most need it.

Unfortunately, the VAR undermines the authority of the referee and the linesmen before they’ve even made a bad decision, as it shows that we don’t really trust their judgement. Obviously we don’t trust them for good reason – they mess up all the time.

The issue is that this can then lead to a snowball effect – a referee or linesman is likely to lose confidence in his own decision-making abilities if the VAR overturns his call more than once or twice in a single match. Once they start second guessing themselves, we’re now at square zero as it were, as the official begins to make mistakes with what should be fairly easy calls.

Problem #3: The pace of the match

In the A-League game I just mentioned, two or three uses of the VAR resulted in seven minutes of stoppage time being added to the match.

This is simply too much of a delay. Not only can the fans get restless, but the players get a decent break that they wouldn’t otherwise have unless there was a serious injury. This isn’t a good thing – there’s a reason that we have 20-25 of Adidas or Nike’s best soccer balls positioned around the stadium and ball-boys to chuck them onto the pitch when the ball goes out of play. Football cannot afford to become slow.

By comparison, other sports have incredibly scientific decision review systems.

In cricket, they use infrared cameras and noise waveform visualisation software (paired with stump microphones) to tell for certain whether the ball has hit the bat.

The third umpire then runs through a specific sequence, which normally takes 40 seconds or so, to determine whether the decision should be overturned. If they don’t have enough evidence, it stays with the on field umpire’s decision, ensuring he is still seen to have authority as a decision maker.

But obviously we can’t do this in football: the pitch is too big, fouls aren’t always clear cut, and the available camera angles will differ for each decision, making the process quite time consuming.

The point still stands though – if the VAR it is to be accepted as a part of football, it needs to be seen to be delivering efficient, fair outcomes on a consistent basis, like the cricket DRS does. But how can we achieve this?

FIFA needs to be able to explain exactly why the VAR made the call he/she did. This doesn’t mean publishing some 300-word report after every match, it just means making the rules clearer, like explaining how a hand ball can be judged intentional or not. This is why people have confidence in cricket’s DRS – the rules are for the most part crystal clear, and the third umpire talks through his decision-making process on TV as he reviews the action.

But fundamentally there’s still a problem. Of course the system will become more efficient over the years as the VARs get better at making good decisions. However, the issue of the referee’s authority will be much harder to resolve.

If they want to avoid having the VAR make the on field officials look foolish on a semi-regular basis, the proper solution would be better referee training, so that they get almost all of the straight forward calls right. Or, they could move to place the authority in the VAR’s hands, rather than the on field referee. This would raise all sorts of issues though – obviously the referee is in a better position to make quick decisions for most fouls, so they’d have to figure out how to avoid having the on and off field officials tripping over each other’s feet.

Maybe the simpler solution for the time being would be to see the VAR for what it currently is: a second referee who for the most part serves to add another layer of confusion and delay (in the immortal words of the Fat Controller) to the decision-making process.

Either way, FIFA needs to take a step back. Implementing the VAR in its current state at the world’s biggest sporting event – the World Cup, as they plan to later this year, would be sheer idiocy. Their Guinea pig leagues have shown that the system is fraught with issues that the governing body is too lazy to fix.