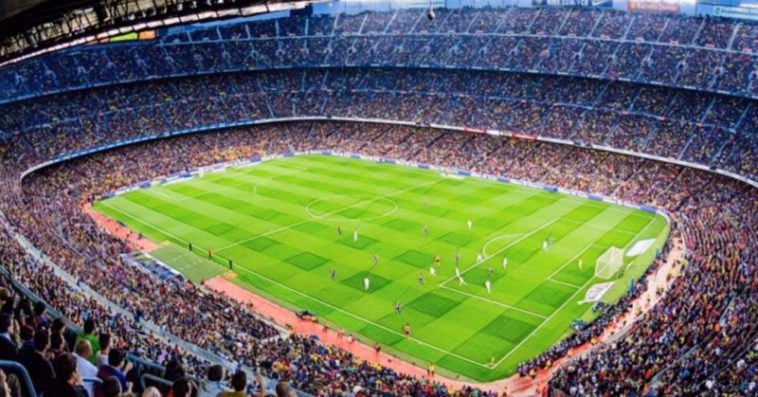 If you’re headed to Barcelona in the near future, you might be considering a tour of Camp nou. A must-visit for football fans everywhere, Camp Nou football stadium is an impressive tourist attraction that has thousands of visitors each and every year. But what can you expect to see if you decide to book a ticket? Here are just some of the points of interest you might experience:

One of the most exciting parts of seeing the stadium is walking through the player’s tunnel. This allows you a taste of what your favourite footballers experience on game day as they approach the pitch. While you won’t be greeted by the cheers of adoring fans, walking through the tunnel is definitely a moment to remember.

Camp Nou’s away team changing rooms are rather minimalistic, but it’s yet another chance to peek behind the curtain of what it’s like to be a world-famous footballer. Not every tour will allow you to see the home team changing rooms, but these are more of a sight to behold. However, even if you don’t get to see them, your guide will give you more information as to what luxuries the players are treated to. Amenities include things like a spa and a treatment room.

Whether you’ve been to a football game in person before or not, you’ll have never experienced views like those from the president’s box. You’ll be able to walk through the box or take a seat and enjoy the view (though it’s true there won’t be anyone using the pitch when you go on your tour). You’ll really get a true VIP experience and feel like one of the president’s guests.

The benches at the pitch’s side

If you’re someone who wants to see the Camp Nou football pitch up close, you can’t miss spending some time at the benches. This is where the football team’s managers get to stand during a game, so you’ll really be able to feel in awe of how big the stadium is. It doesn’t matter if your childhood dream was to be a football player or you’ve always wanted to walk in the shoes of those you’ve seen on a TV screen, you’ll be able to live out your wildest fantasies.

While you’re visiting the stadium, you should also pay a visit to the Barcelona FC Museum if you have time. This will give you lots of extra information about the stadium and the football team there. However, if you’re pressed for time, seeing the stadium and enjoying an audio or in-person tour will give you plenty of food for thought. The museum has three different sections covering the history of the football club, memorabilia and football-related artwork, and any temporary exhibits.

Barcelona has a lot to offer, but if you’re a football fan, then Camp Nou really should be on your itinerary. And don’t worry, you’ll still have plenty of time to take in all the other cultural attractions as well.