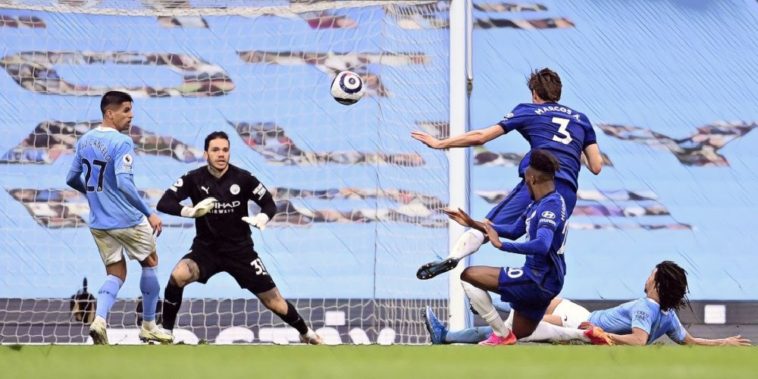 Chelsea moved up to third in the Premier League as they bagged a late winner against Manchester City in a dress rehearsal for the Champions League final.

Chelsea had beaten City 1-0 last months FA Cup semi-final, and this one would also turn out to be a tight, tactical battle in the opening stages, with neither posing too much threat in front of goal for large spells of the first half.

City would, however, take the lead a minute before the interval, a mistake from Andreas Christensen seeing him beaten to the ball by Gabriel Jesus following a ball down the Chelsea left. The Brazilian unselfishly squared the ball to Sergio Aguero, and while the club-record goalscorer couldn’t get his shot off, Raheem Sterling arrived to take the ball off his toe and fire his side ahead.

Chelsea looked like they were imploding as the game moved into added time, Billy Gilmour bringing down Jesus in the box to hand City the chance to double their lead from the spot. The often reliable Aguero stepped up as he looked to equal Wayne Rooney’s 183 goal record for a single Premier League club, though his tame attempt at a Panenka was comfortably kept out by Edouard Mendy.

The west London side had been camped on the edge of their own box for spells in the first half, but were far better after the interval, and would haul themselves level just after the hour mark. A rare mistake by Spanish midfielder Rodri saw the ball drop to Azpilicueta, the defender picking out Hakim Ziyech on the edge of the box before the Moroccan followed up his FA Cup semi-final winner by firing into the bottom corner.

Chelsea would see a couple of goals ruled out for offside, while City had a decent shout for a penalty turned down, but in the 92nd minute, the visitors would bag themselves a winner.

Since Chelsea last lost a game, they have:

Substitute Callum Hudson-Odoi slipped the ball to Timo Werner down the right, before the German cut it back across the box. Marcos Alonso got there first, and while he scuffed his effort, the spin on the ball took it up and over Ederson who could do little to keep it out.

Having gotten the better of Pep Guardiola twice in a matter of weeks, there will be hopes among the Stamford Bridge faithful that the German can make it a hat-trick of wins when the two teams meet in the Champions League final in Istanbul later this month.

Speaking about the game, Tuchel admitted his side got a bit of luck throughout the contest, but was delighted with his team’s fitness and confidence to keep going until the end.

“What a performance in the second half,” he told Sky Sports. “We were more or less equals in the first half, in the last five minutes we almost gave it away completely. If they scored the penalty it was over before it started and we would have no chance to come back.

“If you want to steal all three points at the Etihad you need a bit of luck, moments and decisions from the referee. But we had many half chances in the second half and so a big congratulations to the team for their performance.”