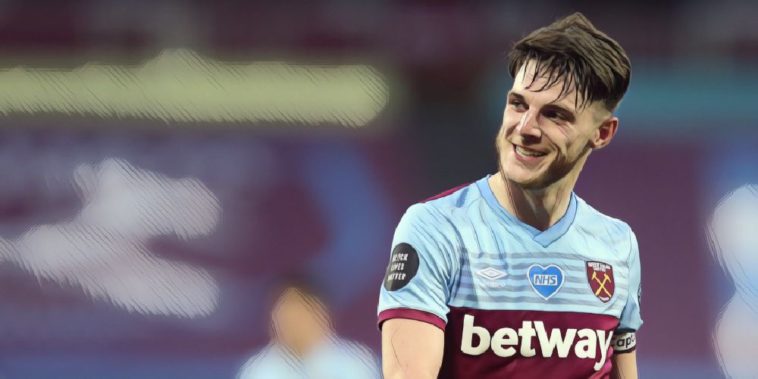 West Ham have no intention of selling Declan Rice this summer and say the midfielder is ‘not for sale’ amid interest from London rivals Chelsea.

Chelsea have been strongly linked with a move for Rice and reports this week suggested the club had submitted an offer of £50m for the England international, speculation that has since been dismissed by West Ham who remain determined to keep hold of their prized asset.

Declan #Rice is the priority as new centre back for #Chelsea.
Frank #Lampard wants bring him to Stamford Bridge.
Chelsea first official bid is £ 50 million to #WestHam.
The #CFC board wants Declan Rice. @SkySport #Transfers pic.twitter.com/ShoQljtowQ

According to Sky Sports, West Ham insist they have received no bids for the highly-rated 21-year-old and will reject any approaches from Chelsea for Rice, the Hammers hopeful the youngster – who has four years remaining on his current contract – will stay at the London Stadium for many seasons to come.

Chelsea, however, are desperate to add Rice to an emerging crop of home-grown talent at Stamford Bridge, with Frank Lampard believing the player could be the solution to his side’s defensive issues.

Rice has played much of his football in midfield since breaking into the West Ham side three years ago, though Lampard feels his long-term future lies at centre-back and is desperate to secure his signing in a bid to fix the Blues’ leaky defence.

Chelsea conceded more goals than any other side in the Premier League‘s top half despite securing a top four finish, whilst their shortcomings were woefully exposed during a 7-1 aggregate defeat to Bayern Munich in the Champions League.

Any potential move would see the midfielder return to Chelsea after being released by the club as a teenager, Rice having spent seven seasons in the academy system of the west London outfit before joining West Ham at the age of 14.

Rice’s time with Chelsea saw him form a close relationship with Mason Mount and the two remain close friends having since been reunited with England, with the former having admitted to being left in tears following the news of his release at Stamford Bridge.