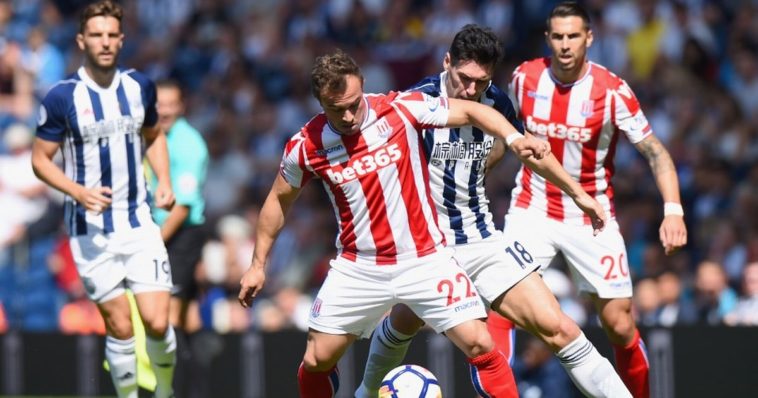 In a tight game at the Hawthorns Stoke put an end to West Brom’s 100% start to the season.

The first half of the game was very cagey and neither side seriously threatened. Stoke kept most of the ball with Xherdan Shaqiri looking to make chances but the West Brom defence was too sturdy.

The one real chance of the half came from Stoke city’s loanee Kurt Zouma. The young defender attempted a shot from range which took a wicked deflection and spun up and towards Ben Foster’s goal. The experienced keeper did well to tip it over the bar.

However, in the second half West Brom began pushing forward and putting pressure on Stoke. This culminated in the opening goal around the 60-minute mark. The impressive Nyom whipped in a cross from the right and new signing Jay Rodriguez stooped to head in at the back post.

It seemed as if the goal finally woke up a slow looking Stoke side. The potters began probing the West Brom defence more but the Baggies sat deep and looked set to hang on. But in the 77th minute substitute Peter Crouch levelled things up.

There was a mix up between new centre back Ahmed Hegazi and Ben Foster and the ball squirmed through for Peter Crouch to head into an empty net. After the goal Stoke continued to pile pressure on West Brom but couldn’t find a winner.

Stoke may argue they deserved the win for their dominance of the game but in truth didn’t create enough before the goal. West Brom still remain the archetypal Tony Pulis team and look very solid at the back and dangerous from set-pieces.