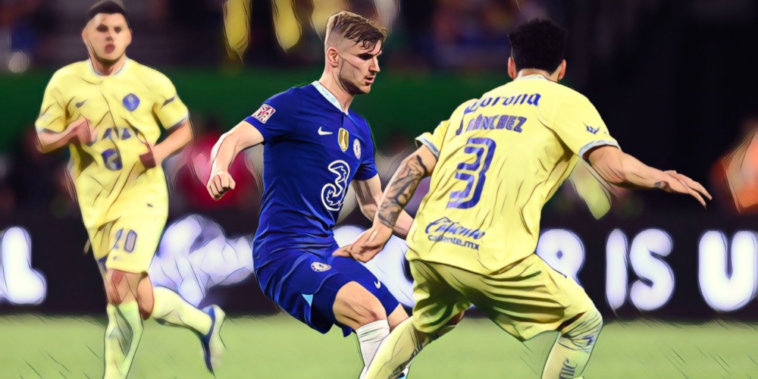 Timo Werner has spoken of his unhappiness at a lack of first-team football at Chelsea and has hinted at a potential move away from Stamford Bridge.

Werner has struggled since signing for Chelsea in a £47.5m deal from RB Leipzig in 2020, with the forward having scored just ten league goals across his two seasons in west London.

The 26-year-old struggled to win favour under Thomas Tuchel last season and made just 15 league starts for the campaign.

Werner has been linked with an exit this summer with the arrival of Raheem Sterling set to increase competition for places at Chelsea and suggested that clear-the-air talks could be required to decide his future.

“First of all, the most important thing is that I am happy. I am happy when I play and score goals. That’s the fact. That’s what I should take care of and the other things will come.”

Werner – who scored in the club’s friendly win over Club America on Sunday – was asked whether he could find that happiness at Chelsea, before suggesting that regular minutes are the sole factor behind his contentment.

“I could be happy everywhere,” he insisted.

Werner admits he is unsure why he hasn’t figured prominently in Tuchel’s plans, but reiterated his desire to earn a regular role in the side ahead of the World Cup in Qatar this winter.

“It is hard to say,” he said. “I didn’t ask but I think of course the manager always has different ideas, different thoughts and what you need in different games, I think in many games I was not in his thoughts so I try to change that.

“It is clear I want to play more and I should play more to first be in good shape for the World Cup and also, to have a chance to play at the World Cup.

“I think it doesn’t change anything whether it is a winter world cup or in the summer. I think if I play half or the season or the whole season, I should play.”

Raheem Sterling’s arrival from Manchester City has added further competition for a place, but Werner insists his situation has not changed from last season as he looks to break into the Blues’ side.

“It’s not different to last season,” he said. “I think it was the same when Romelu (Lukaku) came here that we have big, big competition up front. It is still the same. At a big club like Chelsea you have that competition.

“In pre-season you can show that you want to play that you are a guy who wants to be in the starting XI. That’s what I try.”