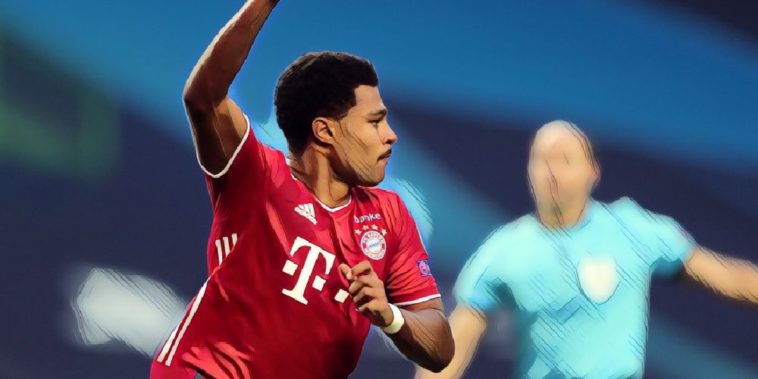 Arsene Wenger has revealed his regret at Serge Gnabry’s departure from Arsenal and insists he always knew the ‘intelligent’ winger would go on to have a great career.

Gnabry signed for Arsenal as a teenager from Stuttgart but struggled to make an impact during five years in England, enduring a nightmare loan spell with West Bromwich Albion and making just 10 league appearances for the Gunners before returning to the Bundesliga, Tony Pulis famously declaring that Gnabry was “not at the level to play for West Brom.”

The winger has since flourished into one of the finest wide players in world football, scoring twice against Lyon to seal Bayern Munich’s place in the Champions League final on Wednesday evening, Gnabry having scored 23 goals in all competitions this season to fire the Bavarians to the brink of a historic treble.

Wenger has now opened up on the rise of his former player and believes the 25-year-old has become ‘one of the dominant players in Germany’ since leaving Arsenal, hailing the star’s talents following his performances for Bayern this season.

“Let’s not forget Gnabry, I bought him at the age of 15 from Stuttgart and he was injured a lot,” Wenger told beIN Sports.

“His tendency was a bit too easy, like I’ve told you about with these young talented players, but he has matured a lot and is now one of the dominant players in Germany.”

The former Arsenal boss has denied wanting Gnabry to leave and admitted his sadness at the player’s departure, revealing the German turned down the opportunity to sign a new contract with the club following a difficult period in the Premier League.

“No, no, we had an agreement with him you know,” Wenger added.

“I had given him out on loan to West Brom and he didn’t play a game. He came back, he was injured. We worked very hard with him for six months and he went out with the German national team, under-21’s, and Bayern made a deal with Werder Bremen.

“He wanted to sign in the end, didn’t want to extend his contract (with Arsenal) and I was very sad. But we couldn’t get over the line with him because I knew he would have a great career.

“He can be a number nine, a number 10…he’s a very intelligent player.”