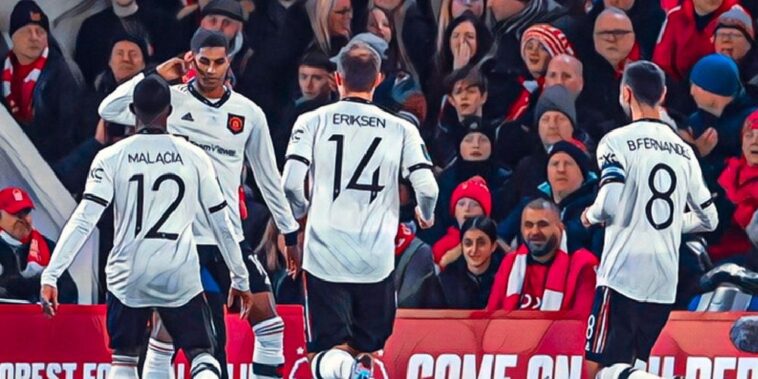 Manchester United ran out comfortable 3-0 winners over Nottingham Forest in the first leg of their Carabao Cup semi-final.

Manchester United started the game the by far the brighter and sharper of the two sides, and they would take the lead after just six minutes through their in-form forward, Marcus Rashford. The England international picked up the ball inside his own half, driving into the Forest half and leaving a trail of players in his wake, before cutting inside and firing past Wayne Hennessey at his near post.

Forest thought they had pulled the scores level midway through the first half as the hosts broke with pace before Sam Surridge finished expertly past David de Gea, only for VAR to rule it out for a marginal offside.

The disallowed goal did, however, fill Forest full of belief, and Welsh winger Brennan Johnson created a number of presentable opportunities for the Reds before the break.

After their bright start to the game, Manchester United had gone a bit off the boil, though they went into the half-time interval with a two-goal advantage as Wout Weghorst netted his first goal for the club. Wayne Hennesey parried Antony’s strike from the edge of the box straight into the path of the Dutchman who reacted quickly to fire into the roof of the net.

The goal before the interval seemed to knock the stuffing out of the hosts, with United largely in control in the second half, and in the 89th minute, the Red Devils scored a third goal that will have their fans planning their trips to Wembley, Bruno Fernandes firing home from the edge of the area following a lay-off from substitute Anthony Elanga.

Speaking after the game, Erik ten Hag said he was happy with United’s performance, though said his side still need to ‘improve’ after Forest threatened to get back into the game in the first half.

“I’m happy with the performance and I think over 90 minutes we controlled it. There was one moment that could have changed the game and that is where we need to improve but overall we controlled it.

“They changed the system and we didn’t anticipate that. It can’t happen. That is still a moment where we have to learn and improve as a team if you want to be top. Those moments can’t happen.”

“We almost let them come into the game and we can’t allow an opponent to get back into the game when we started so good. We dictated it totally then in one moment it can change. We need to avoid that.

“I think in the second half we were much more composed and we tracked them. It was much better.”

Asked about Wout Weghorst netting his first goal for the club, the Dutchman said: “I know it’s what he is capable of. He has a really good goalscoring record. We created some more good chances. It was a real striker’s goal.

Marcus Rashford was withdrawn just before the hour mark shortly after taking a knock, though the United boss allayed fears over his forward’s fitness.

“We had already planned the substitute. Marcus Rashford did his job and scored another goal so we were in a good position.”

Next up for United is an FA Cup fourth round clash against Reading at Old Trafford before they meet Forest again next Wednesday in the second leg.

“Yeah we have to play one game. We have to do the same, prepare and make a good game plan. The players have to be focused.”