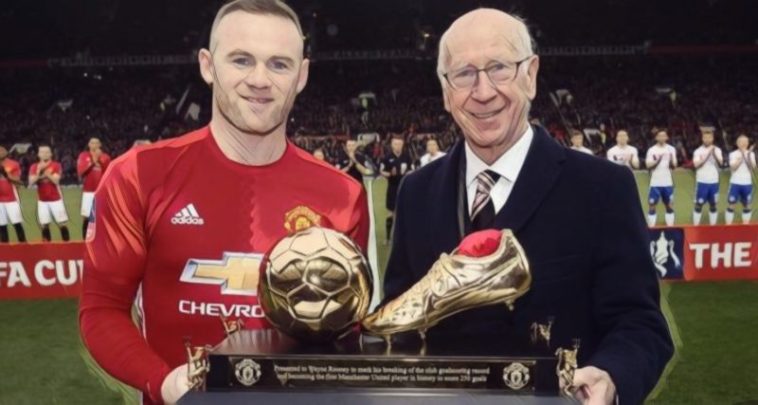 The former England captain would enjoy a glittering 13-year career at Old Trafford, winning a wealth of major honours and breaking Sir Bobby Charlton’s long standing record as the club’s greatest ever goalscorer.

Ahead of Rooney’s reunion with his former side, we’ve decided to look back at the career of one of the most influential footballers of the modern era.

Here are Wayne Rooney’s most memorable moments as a Manchester United player:

Rooney’s emergence for Everton and England had already been greeted amid much fanfare, the forward becoming the youngest ever goalscorer in Premier League history and starring for the national side during the European Championships in 2004.

Manchester United beat off competition from Newcastle to make Rooney the most expensive teenager in history, though the Red Devils’ fans would have to wait for their first glimpse of their new signing following injury.

Rooney’s bow would come in a Champions League group stage game against Fenerbahçe at Old Trafford, where he announced himself as the club’s latest hero in truly stunning style.

The 18-year-old dismantled the Turkish side in sensational fashion, scoring twice in the first half with two finishes straight out of the top drawer. Such was the debutant’s impact, he would claim free-kick duties from veteran Ryan Giggs in the second half, curling home his hat-trick goal to become the youngest treble scorer in Champions League history.

Following his history-making debut, Rooney would continue his fine form over his first season under Sir Alex Ferguson, scoring his first league goal on his 19th birthday to help end Arsenal’s record 49-game unbeaten run in the Premier League.

Rooney would also win the first major trophy of his career with League Cup success – scoring twice in the final against Wigan – whilst his back-to-back Young Player awards made him just the third player to achieve the feat, following in the footsteps of United teammate Ryan Giggs and former Liverpool forward Robbie Fowler.

Ferguson’s side would undergo a period of transition during Rooney’s opening seasons as a United player before rising once more to the summit of English football, winning three consecutive Premier League titles between 2007 and 2009.

The Scouse striker would be at the forefront of those successes, scoring 61 goals across three campaigns as United conquered both at home and abroad.

United became the first English side in the Champions League era to reach successive finals in 2008 and 2009, the former ending in victory as Chelsea were beaten on penalties in Moscow, Rooney crowned as a European champion following the first ever all-English final.

Cristiano Ronaldo’s world-record departure to Real Madrid left Rooney shouldering much of the goalscoring burden at United, though the forward flourished in the absence of the Portuguese star to enjoy arguably the best individual season of his career in 2009/10.

Rooney scored a career-best 34 goals in all competitions as United finished as runners-up in the Premier League, also scoring the winning goal as Aston Villa were beaten 2-1 in the League Cup final at Wembley.

Voted as the greatest goal in Premier League history at the division’s ’20 Seasons Awards’, Rooney’s incredible derby day intervention stands out as the iconic goal from a career of stunning highlights.

In the midst of a hostile Manchester derby at Old Trafford, Rooney produced an incredible display of athleticism and technique to execute the perfect bicycle kick beyond a helpless Joe Hart in the visiting goal.

The goal was a moment of genius and sealed a precious three points for Sir Alex Ferguson’s side, United finishing as champions ahead of runners-up Chelsea by nine points – earning a record-breaking 19th league title in the process.

Rooney’s quality and longevity has seen him set a whole host of records throughout his career, including becoming the greatest goalscorer in history for both Manchester United and England.

It would be Sir Bobby Charlton who he would eclipse for both of those landmarks, Rooney setting the record at club level during his final season in a red shirt before returning to Everton.

The forward levelled Charlton’s record of 249 goals during an FA Cup third round tie against Reading, before moving ahead of the legendary star by scoring a brilliant free-kick equaliser against Stoke City at the bet365 Stadium in 2017.