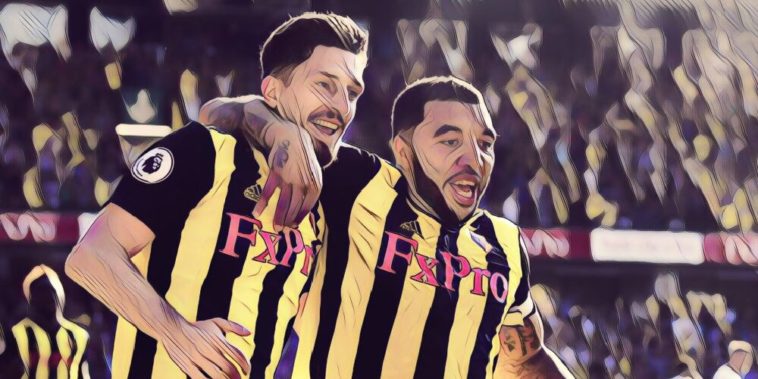 Watford and Tottenham had three wins from three coming into this clash at Vicarage Road, but a lacklustre Spurs performance meant the Hornets came back from a goal down to take the win.

After a goalless first half, Tottenham took the lead in the 53rd minute when a Lucas Moura shot deflected in off Abdoulaye Doucouré. Although Spurs dominated possession, they only managed two shots on target from 11 attempts, and Watford capitalised on their lack of clinical finishing.

In the 69th minute Deeney sent a well-placed header into the far corner to bring the scores level following a Watford free-kick. Just 7 minutes later, with Watford on the ascendancy and Spurs with no reply, Cathcart scored Watford’s second header of the day from a corner. A late Harry Kane chance was Tottenham’s best opportunity to rescue a point but his header flew over the bar.

Watford join Liverpool and Chelsea with four wins from four, whilst Tottenham drop down to fifth after the loss.

Tottenham are not title challengers

Tottenham’s players and fans have big aspirations and it had been discussed that they could aim for the Premier League title this year, especially after beating Manchester United last week. Pochettino was unhappy with that win and said Tottenham were lucky, but the away fixture to unbeaten Watford was another huge test and winning would’ve shown Spurs to be potential title challengers. Taking the lead and losing it to a team that a title challenger would be expected to beat, shows that Spurs are not ready to compete with the likes of Manchester City yet.

Deeney can still compete at the top

Now 30 years old, some have doubted Troy Deeney as a Premier League level player. He is showing, especially with his performance against Tottenham, that he can still compete. He overpowered Davinson Sanchez to create a chance that nearly resulted in a goal, and not longer after he scored the equaliser that spurred Watford on to push for the win. Having played over 300 times and for 8 years, now their captain, having taken Watford from a mid-table Championship side to competing at the top of the Premier League, it shows that Deeney is here to stay and will continue troubling defences for the foreseeable future.

Lucas Moura will be a handful for defenders

Despite not getting the win, Moura showed once more that his pace is going to be a trouble for defenders. On multiple occasions he made good runs, out-paced the defence, getting into dangerous areas. In four games this season he’s already scored three and caused the own goal against Watford, so there are no signs of his goal contributions stopping any time soon. The Brazilian joined in January and with a full pre-season behind him, he is finally showing what he’s capable of with Heung-Min Son out on international duty. It’s not going to be easy for the South Korean to come back into the squad with Lucas on this kind of form, and it looks like we’re yet to see the best from the Spurs no. 27.

Watford are the real deal

Watford have had an amazing start to the season but it was yet to be seen how they fared against one of the top six sides, and this win against Tottenham shows they’re capable of competing. They have a well-balanced squad – Roberto Pereyra has stepped up and has added a lot to their team – look dangerous on the attack and were, frustratingly for Tottenham, very solid in defence, preventing the North London side from fashioning any meaningful chances. If they can keep up this kind of form then who knows where they can finish up this season.

Stadium situation could be playing on Tottenham’s minds

With the new stadium delayed indefinitely and overbudget, Tottenham have suffered and they weren’t able to make any signings in the summer, whilst having an uncertain future regarding where future games will be played. There’s talk of playing an EFL cup fixture at Milton Keynes, which could unsettle some players as there’s no stability of having a ‘home’ stadium, which is what the new stadium would bring. There’s a possibility all the behind-the-scenes problems at Tottenham could be playing on their minds and this is something they will need to overcome to achieve the heights they hope to this season.