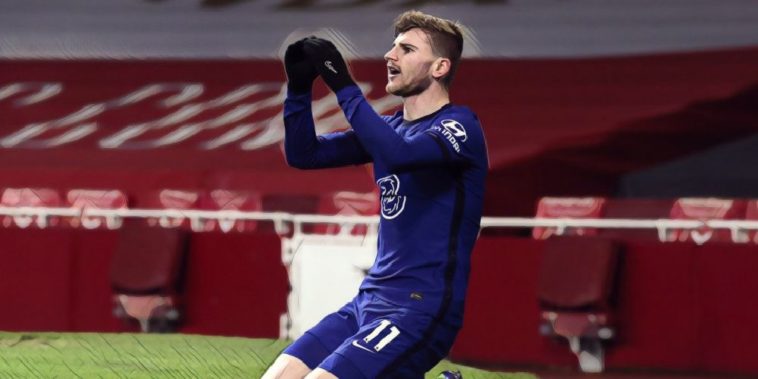 Frank Lampard has revealed that his decision to hook Timo Werner at half time in the 3-1 loss to Arsenal, saying the striker simply ‘wasn’t giving enough’.

Chelsea slipped to a third loss in their last four outings on a disappointing evening in north London, and while the stats show that Frank Lampard’s side enjoyed more possession and more shots, the actual pattern of play really didn’t reflect the same impression.

Arsenal started brightly, and while Chelsea started to get a foothold in the game, they very rarely actually looked like threatening Bernd Leno’s goal, particularly in the first half, with none of their seven shots before the break being on target.

As the teams emerged for the second-half, so too did Callum Hudson-Odoi and Jorginho, with Timo Werner and Mateo Kovacic making way as Frank Lampard looked to ‘change the course of the match’, and the Blues boss admitted his decision to hook Werner.

“The goals not going in is certainly something an attacking player gets judged on and I could have made more subs,” he said at his post-match press conference, “but I felt I had to make subs in those two areas to inject energy.

“Timo today wasn’t giving us enough with or without the ball and some of it we have to give him time because it is a different league but also we have to get there quickly, so we’ll see about his tiredness. I will have a conversation with him but it was a decision I just felt I had to make. I had to make changes to try to change the course of the match.”

Werner’s last goal for Chelsea came back in the 4-1 win over Sheffield United back in early November, though Frank Lampard has previously remained unconcerned about his goal output with the German remaining a threat to defences with his pace.

However, he managed just 23 touches of the ball in the loss to Arsenal, completing just eight passes and losing possession eight times before the 42-year-old decided to replace him with England international Hudson-Odoi, who was a much more effective 45 minutes than the former RB Leipzig man.

See also – The item at the top of each Premier League managers Xmas wish list: Arsenal to Leicester