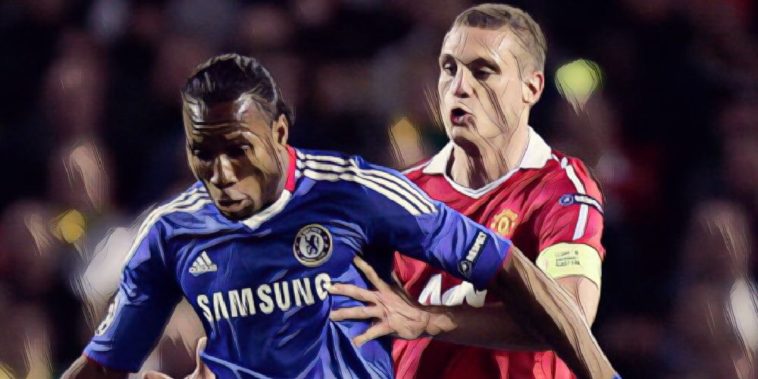 Nemanja Vidic has discussed the most difficult opponents he faced during his Manchester United career.

The former Serbia international won five Premier League titles during a hugely successful eight-year spell at Old Trafford, being named as club captain and establishing himself as one of the division’s all-time great central defenders.

Vidic left Manchester United in 2014 before retiring from the game in 2016 following a spell at Inter Milan and has been reflecting upon his career in English football, citing the likes of Didier Drogba and Sergio Aguero amongst his most challenging opponents, though left out Fernando Torres despite their numerous battles.

“My first experience was Peter Crouch. I’d never seen a two-metres tall player before. I was thinking ‘Wow, what can I do today with this guy?”

Chelsea icon Drogba was amongst Vidic’s toughest opponents, the defender having battled against the Ivorian on several occasions as United and Chelsea went head-to-head for major honours, including the 2008 Champions League final.

“He was a very clever player who would get into the brain of the defenders. Drogba was on you for the full game. I played against him when we were both at the peak of our careers.”

Other notable opponents from the 37-year-old’s career include South American duo Sergio Aguero and Luis Suarez. Vidic faced the pair during fiercely contested clashes with rivals Manchester City and Liverpool respectively, and says each possessed their own difficulties.

“He (Aguero) knows where the ball will come and where he can attack. But in the box, he has a low centre of gravity, which helps him change direction quickly, especially against the big English defenders.”

On Suarez, Vidic added: “Everything is done in bursts. I don’t think he knows exactly what he’s doing but he succeeds. He’s very direct and hungry to score. He runs for 90 minutes, he has a fire in him.”

Lukaku is ‘free and happy’ after Manchester United exit