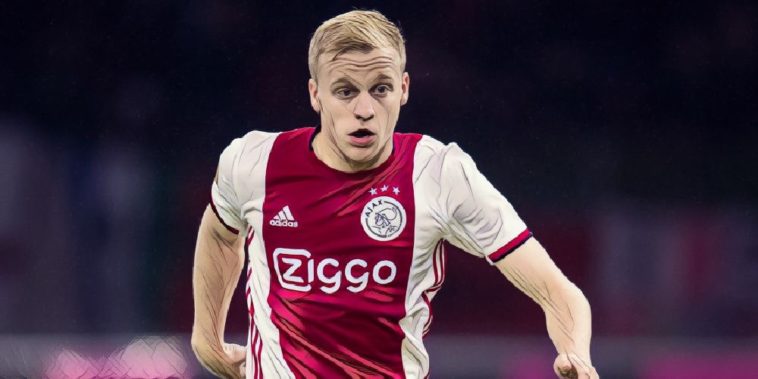 New Manchester United signing Donny Van de Been has revealed he is excited by the direction the club is going under manager Ole Gunnar Solskjaer, after sealing his £40m move on Wednesday evening.

The 23-year-old attacking midfielder has enjoyed an impressive few seasons at Ajax, his performances in the Champions League in particular catching the eye of a number of Europe’s biggest names – including Real Madrid.

Despite having been heavily linked with a move to the Spanish capital prior to the COVID-19 pandemic, the Dutch international sealed a swift move to Old Trafford which will see him link up with the likes of Paul Pogba and Bruno Fernandes in central midfield.

That mouthwatering crop of midfield talent is a further indication of the gradual improvement that Solskjaer has made to his playing squad since his arrival at the club in December 2018. With the Red Devils securing third place and a much coveted Champions League spot last term, Van de Beek certainly believes there are exciting times ahead at United, Ole Gunnar Solskjaer having outlined his ‘vision’ for the club.

“I cannot begin to explain how incredible an opportunity it is to join a club with such an amazing history,” he told ManUtd.com.

📗 We can't wait to see what the next chapter holds! 😍#MUFC @Donny_Beek6 pic.twitter.com/Gskd6Ry8ob

“I would like to thank everyone at Ajax. I grew up there and I will always have a special bond with the club.

“I am now ready to take the next step in my career and perform at the highest level and there is no higher standard than Manchester United.

“Everyone has told me how amazing the Old Trafford atmosphere is and I am looking forward to experiencing that, once it is safe for the fans to return.

“This team has some of the best midfielders in the world and I know that I can learn from them and also bring my own strengths to the group.

“Having spoken to the manager about his vision for this team, the direction that the club is going in is hugely exciting and I cannot wait to be a part of that.”

United’s European exploits mean that they will miss the opening weekend of the season, Solskjaer’s side having to wait until September 19 when they face Crystal Palace at Old Trafford.