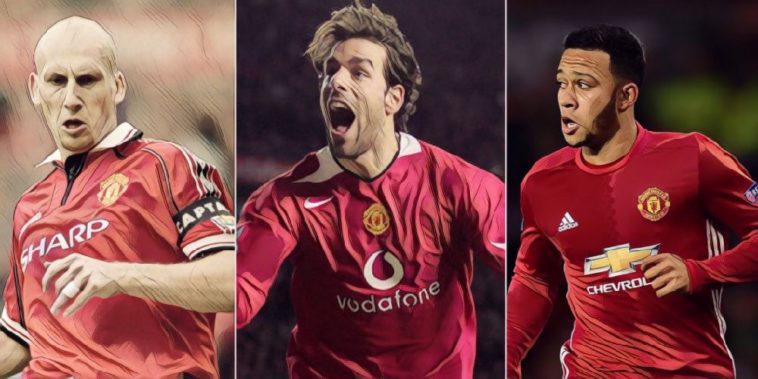 Manchester United are closing in on their first major summer signing with Ajax star Donny van de Beek on the verge of completing a move to Old Trafford, the Netherlands international arriving with a promising reputation after flourishing for the Amsterdam outfit.

History tells us that signings from the Netherlands can often be fraught with danger, however, but the Red Devils are no strangers to going Dutch after signing 10 players from the Eredivisie throughout the Premier League era.

Ahead of the club’s capture of Van de Beek, we’ve decided to look back at United’s previous signings from Holland’s top flight and rate their impact after moving to the Premier League giants:

Van der Gouw arrived at Manchester United in the mid-nineties as an experienced deputy to Peter Schmeichel amongst the club’s goalkeeping ranks, spending six seasons with the club and winning a host of major honours.

The Dutch shot-stopper was a reliable number two but found his opportunities limited amid the presence of the aforementioned Schmeichel, making just 37 league appearances for the club.

The majority of those showings came in the immediate seasons after Schmeichel’s departure as Sir Alex Ferguson struggled to adequately replace the Denmark international, Van der Gouw featuring enough to earn back-to-back Premier League winners’ medals at the turn of the millennium.

Jaap Stam was signed from PSV Eindhoven in the summer of 1998 and made an immediate impact during a historic debut season in English football, the Dutch defender a colossal presence in the United backline as the club secured an unprecedented Premier League, FA Cup and Champions League treble.

Stam was a fearsome physical presence with the pace to match any opposition forward, winning three consecutive league titles with the Red Devils and being named in the PFA Team of the Year on each occasion.

The Netherlands international’s brief spell in the Premier League saw him establish himself as arguably the best centre-back in the division, before a fall-out with Sir Alex Ferguson over comments in his autobiography led an acrimonious departure to Lazio.

Stam spent three seasons in Rome before later spells at AC Milan and Ajax, his premature departure from United often cited as one of Ferguson’s greatest regrets.

Ruud van Nistelrooy briefly became the most expensive player in British football history when signing for Manchester United in 2001, the forward eventually arriving after an initial move was halted due to a serious knee injury.

The Dutchman certainly proved to be worth the wait as he established himself amongst world football’s finest finishers during a prolific five-year spell with the Red Devils, winning the PFA Player of the Year award during his debut season and plundering 150 goals in just 219 appearances in all competitions.

That period saw Van Nistelrooy forge a reputation as the best penalty-box poacher in Europe, finishing as the leading scorer in the Champions League in three separate seasons and winning the Premier League’s Golden Boot during the 2002/03 campaign.

That season proved the zenith of his spell in English football as the star hit 44 goals in all competitions for Sir Alex Ferguson’s title-winning side, the most prolific single campaign of any player in the Premier League era.

He won one Premier League title, the FA Cup and League Cup before leaving for Real Madrid, a well-publicised falling out with Ferguson leading to a move to the Bernabeu.

Another signing from PSV Eindhoven, Park Ji-Sung’s £4m move to Manchester became a bargain buy for the club as the South Korean international flourished as the Red Devils’ inexhaustible cult hero.

Accusations that the arrival of a high-profile Asian player was little more than a marketing tool were swiftly proven both lazy and unfounded, Park becoming a key cog in a United side who wrestled back the ascendancy in English football from a billionaire-backed Chelsea.

The selfless style of the midfielder made him a firm fans’ favourite as he produced performances of insatiable work-rate and desire, his abundance of energy providing the side with dynamism, and often seeing him trusted on the biggest of occasions.

He made 205 appearances for the club in all competitions over a seven-season spell, winning four Premier League titles and the Champions League amongst his extensive collection of silverware.

The Belgian-born Brazilian came through the academy system at PSV Eindhoven before moving to Old Trafford as a teenager, where his career is yet to truly take off despite once being highly regarded as a prospect.

Pereira spent loan spells with both Granada and Valencia before returning to prove his worth at United, the midfielder handed regular opportunities and making 40 league appearances over the past two seasons under Ole Gunnar Solskjaer.

The 24-year-old has, however, struggled to produce the level of performances required at one of the Premier League’s leading sides and an exit appears likely after falling down the club’s midfield pecking order.

Alexander Buttner arrived at Manchester United with hopes that the flying full-back could be a long-term replacement for Patrice Evra, the Dutchman having impressed with his performances in the Eredivisie with Vitesse Arnhem.

An impressive debut display against Wigan further raised those hopes but it proved to be a false dawn, the left-back struggling to win favour and making just 13 league appearances over a two-season spell.

Buttner finished his debut season with a Premier League winners’ medal in what proved to be Sir Alex Ferguson’s final campaign before retirement, though he struggled to build on his initial promise and has since enjoyed a nomadic career taking in spells at the likes of Dynamo Moscow, Anderlecht and MLS outfit New England Revolution.

Another player signed from the Netherlands as a teenager, Fosu-Mensah has so far been unable to build on his early promise and looks unlikely to forge a long-term career at Manchester United.

The thrice-capped Dutch international has made 15 league appearances for the club since moving to Old Trafford six years ago, spending indifferent season-long loan spells at both Crystal Palace and Fulham.

He missed almost the entirety of last season after suffering a serious knee injury before returning in the latter stages of the campaign, though his future remains uncertain amid reported interest in the versatile defender from Germany.

United opted to trigger a one-year contract extension in the player’s deal earlier this year, however, his new deal could simply be to protect his market value ahead of a potential sale.

Louis van Gaal secured the signing of compatriot Daley Blind following his appointment as Manchester United manager in 2014, the versatile midfielder having played his part in the Netherlands side which reached the semi-finals of that summer’s World Cup in Brazil.

Blind was a reliable performer in a variety of roles both in defence and in midfield, securing FA Cup success under Van Gaal before winning a Europa League – beating former side Ajax in the final – and League Cup double under Jose Mourinho.

The Dutchman made 141 appearances for the club before falling out-of-favour under the Portuguese, returning to Ajax after four seasons in English football and forming part of the side which won a domestic double in 2019.

In truth the move perhaps came too soon for a player still largely learning his trade, with Depay failing to make the grade during a disappointing 18-month spell in English football despite flashes of his obvious promise.

The Netherlands international was moved on after falling out-of-favour and has subsequently rebuilt his reputation in the colours of French side Lyon, his starring displays seeing the forward once more linked with Europe’s biggest clubs.

Depay has scored 46 goals in just 103 league appearances since moving to France and established himself as a leader at Lyon, his disappointing Premier League venture forgotten as he bids to fulfil his potential.

The Netherlands youth international signed for United as a teenager from Feyenoord four years ago, the Red Devils beating off competition from Premier League rivals Chelsea to secure the precociously talented winger.

Chong has been handed fleeting first-team opportunities since the arrival of Ole Gunnar Solskjaer as manager, but is yet to transfer his fine form at youth level – where he was named as the club’s Young Player of the Year in 2017/18 – into the senior set-up amid fierce competition for places.

United have allowed the winger to depart on a season-long loan deal to Bundesliga side Werder Bremen ahead of the new season, where it is hoped the 20-year-old can hone his talents before making an impact upon his return to Old Trafford.