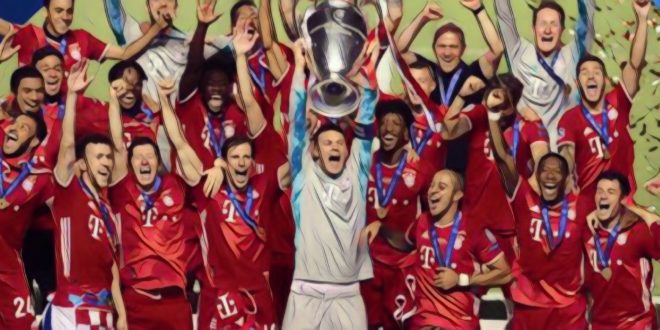 Bayern Munich are the new champions of Europe after defeating maiden finalists Paris Saint-Germain in the Champions League final on Sunday, the German giants lifting the famous trophy for the sixth time following their 1-0 victory in Lisbon.

As always, social media and Twitter were on hand to react to the biggest game in club football and we’ve decided to delve into some of the best tweets following Bayern’s coronation as European champions.

100% – FC Bayern München are the first side in European Cup/Champions League history to win 100% of their games in a single campaign en route to lifting the trophy (11 wins). Flawless. #PSGFCB #UCLfinal pic.twitter.com/taT6pn23Ik

The rise of Alphonso Davies has been one of the feel-good stories of the Champions League season, a tale which is as remarkable as it is inspiring.

The teenager spent the first five years of his life in a refugee camp in Ghana before moving to Canada as a youngster, since enjoying a meteoric rise to become one of the world’s finest full-backs and the first ever Canadian winner of the Champions League.

This one for everyone who’s chasing a dream right now, take it from me don’t give up it may seem impossible now but just keep working on your kraft keep grinding 🙏🏾

Manuel Neuer coming off his line to save yet another 1v1 pic.twitter.com/WQprDfZnle

An evenly contested clash was eventually decided by a goal from former PSG player and France international Kingsley Coman, the winger’s links to the French capital – alongside perfect pun potential – not lost on the footballing public.

Man from Paris, who played for Paris, whose father supports Paris, scores goal that stops Paris winning a first ever European Cup. Which was invented in Paris.

Coman the Bavarian is the first Bavarian to score in a Champions League final since Thomas Muller in 2012.

Bayern’s post-match celebrations also attracted the attention of social media, with Robert Lewandowski – the Champions League’s leading scorer this season – welcoming a guest into his bed for the night.

The photo we've all been waiting for 😂🙌

Meanwhile, just when you think you’ve seen it all with trophy celebrations, Bayern’s Lucas Hernandez does this…

Big question for me is: why hasn't anyone thought of this before? We've all been asleep on the job. pic.twitter.com/kn53DCWZud

Once the celebrations subside the trophy will be heading to Munich once more, though only once ‘Old Big Ears’ has cleared customs, of course.

"Do you have any liquids, electrical items or @ChampionsLeague trophies in your bag?" 🏆#MiaSanChampions pic.twitter.com/Y8fd6wW4Cb

Read – Picking our 19/20 Champions League Team of the Season