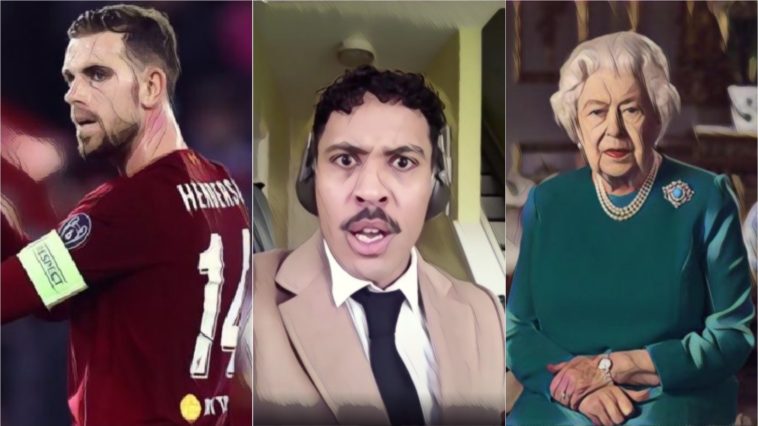 The best tweets from the world of football this past week, featuring a game of political football, the Queen addressing the 1994/95 Leyton Orient squad, and some Chris Kamara impersonators.

Football became a political battle ground these past couple of weeks, but while players have been working hard trying to organise a scheme to help out those in need, politicians have been busy giving themselves more money.

Premier League clubs have come under scrutiny for using the government’s furlough scheme, but at least Liverpool changed their minds. Only after suffering a PR disaster, mind…

Some talented folks have been getting creative reenacting this classic Soccer Saturday moment:

We salute the effort that went into this one.

This took me ages to edit together so please don’t let this flop 😭😂@chris_kammy @JeffStelling pic.twitter.com/n4aZsInIcj

Meanwhile, the Queen invoked the spirit of John Sitton in her address to the nation.

Elite levels of football like this are sorely missed right now.

Missing football so much, can’t wait to be back ⚽️🔥 https://t.co/nbO5OnuPTm

I don’t even need the context for this. It’s just sublime. Been watching it on a loop for 30 hours straight now.

Overmars still has the class he used to have pic.twitter.com/XQUBUhmJOp

Speaking of a smack to the face…

Anyone else deep in the Football Manager rabbit hole?

Me to my players on FM: Work the ball into the box

I mark personal growth with each new save.

One of the funniest things about playing Football Manager after seven years out of the game is realising how much you’ve matured not only as a manager, but as a man. Fewer wars of words with opposition managers, giving the press nothing. I’m focused purely on Cagliari this Sunday

Niall Quinn has got skills to burn.

We gave Niall Quinn one job…

We asked him to promote #FAIHomeskills in one of his old Ireland shirts and this is what he sent us! https://t.co/t0WVDydiGv

Nope, not bored at all.

Am I missing the football? Not really. I always spend an hour or two a day watching this. pic.twitter.com/oeAHu1O7MY

See Also: The Premier League’s plan to finish the 2019/20 season