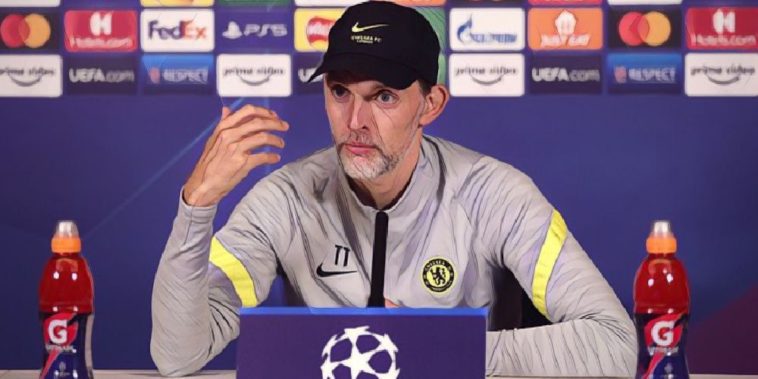 Thomas Tuchel has talked down Chelsea’s chances of turning around their Champions League quarter-final with Real Madrid, but insists the holders will try on a ‘big night’ at the Bernabeu.

Chelsea travel to face the Spanish giants in the second leg of their quarter-final tie on Tuesday, looking to overturn a two-goal deficit after a 3-1 defeat at Stamford Bridge last week.

Karim Benzema’s hat-trick has put Real Madrid in pole position to reach the semi-finals and Tuchel has admitted that his side ‘don’t have the biggest chance’ to reach the last four.

However, the German insisted his side will try their best to turnaround the tie ahead of a ‘big night’ for the West Londoners in Europe.

“Of course we don’t have the biggest chance given the result from the first leg,” Tuchel said at his pre-match press conference.

“Given the competition, the opponent and the stadium it will be very difficult but we never manage our input by the chances we have for our result.

“It is unlikely [turning around the tie] but it is worth trying and trying means that we will play to our fullest and to our full limit. This is what it is, it is a big night for us.”

Tuchel provided an update on the fitness of his squad ahead of the clash and confirmed that Romelu Lukaku will not travel due to an Achilles problem.

Callum Hudson-Odoi and Ben Chilwell also remain sidelined, whilst Ross Barkley is missing through illness. There was, however, better news on Cesar Azpilicueta who will return to the squad after missing the 6-0 win at Southampton on Saturday.

“With the injury news, Callum Hudson-Odoi is still out and Ben Chilwell is of course out for a long time,” Tuchel added.

“Romelu will not travel due to his pain in the achilles that he has felt recently but Azpi is in the group. He has tested negative several times now and is okay to be part of the squad.

“Ross Barkley is sick, however, and will not travel with us later. That is the situation right now and everyone else is in the squad.”