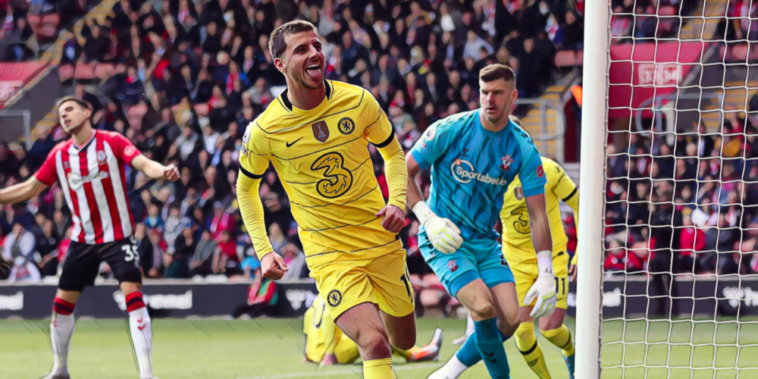 Each week we delve through the Premier League action and compile our divisional Team of the Week, with the latest fixtures including a pulsating clash at the Etihad between the two two.

The gap at the top remains as it was following an enthralling 2-2 draw between title rivals Manchester City and Liverpool, whilst there were huge wins down at the bottom for Newcastle, Leeds and Everton.

Spurs continued their impressive form and Champions League chase with an emphatic thrashing of Aston Villa, though Arsenal, West Ham, Manchester United and Wolves all lost ground on the top four with defeats.

Tottenham’s push for Champions League football continued with a 4-0 win at Aston Villa, though the scoreline failed to reflect the first half momentum as Villa peppered Spurs’ goal with shots.

Steven Gerrard’s side found Hugo Lloris in inspired form however, with the France international making seven saves in the first half alone – a record for a Spurs goalkeeper in the first half of a Premier League fixture.

7 – Hugo Lloris made seven saves in the opening 45 minutes against Aston Villa; since Opta have this data available (from 2006-07), it's the most by a Tottenham goalkeeper in the first half of any Premier League match. Resistance. pic.twitter.com/Rcau7gx4oi

Matty Cash, Jacob Ramsey, John McGinn and Philippe Coutinho were all frustrated in their bid to find a breakthrough for the home side. An outstanding showing of shot-stopping from the club captain, who ensured his side’s fine form continued at Villa Park.

Thomas Tuchel made changes as he sought a response from his Chelsea side this week and the west Londoners delivered with a 6-0 thrashing of Southampton at St Mary’s.

One pre-game talking point was the use of Ruben Loftus-Cheek in an unfamiliar right wing-back role, but the midfielder excelled in the defensive position with a performance full of power and purpose.

Loftus-Cheek was a real threat as Chelsea ran riot in the first half and his cross led to the opening goal of the game. He linked well with Mason Mount down the right channel throughout and provided Tuchel with a reminder of his value to the squad.

Cooper was brilliant in Leeds’ 3-0 win at Watford, making a number of vital interceptions and anticipating danger as Jesse Marsch’s side secured a pressure-relieving win at Vicarage Road.

The centre-back led the clash for successful passes (37), aerial duels won (7) and interceptions (5) against the Hornets and the returning club captain’s leadership has been a huge addition to Marsch’s side as Leeds look to escape danger.

Three points at Watford has provided Leeds with vital breathing room from the bottom three and Cooper was at the heart of their success.

Norwich ended an eight-game winless run to beat Burnley 2-0 on Sunday, the Canaries adding to their beaten opponents’ relegation fears with a win at Carrow Road.

Goals from Pierre-Lees Melou and Teemu Pukki sealed three points for Dean Smith’s side, but it was the resilient defensive performance from Grant Hanley that laid the foundation for victory.

The Scotland international led his teammates for clearances (12), interceptions (3) and defensive aerial duels (9/9) against Burnley in a commanding performance at centre-back.

Vitaliy Mykolenko has not had the easiest of adaptions to the Premier League, arriving into a new country and competition in a struggling side and with the off-field issues that will have no doubt impacted his mental state.

Not to mention a change of manager just days after his arrival at Everton, but the Ukrainian left-back produced the best performance of his career with the Toffees so far as Frank Lampard’s side beat Manchester United 1-0 at Goodison Park.

Mykolenko was defensively sound with five duels won, three tackles and four clearances, whilst he showed great energy to get up and down the left flank in a seismic three points for Everton.

After a challenging period in which Everton’s transfer wisdom was once again questioned, this was a hugely encouraging showing from the 22-year-old.

Brighton bounced back from their recent struggles with a superb win at Arsenal this weekend, denting the Gunners’ top four hopes with a 2-1 win at the Emirates.

Enock Mwepu was the star of the show for the Seagulls in a brilliant all-round midfield performance, creating one and scoring another – his goal a sublime half-volley from the edge of the area – to earn three points for Graham Potter’s side.

The summer signing from Red Bull Salzburg is growing in influence in the club’s engine room and matched his attacking output with defensive work-rate, covering the ground in North London and ending with six interceptions and eight ball recoveries.

🔵⚪️ Enock Mwepu has been involved in five goals in his last five #PL matches (1 goal, 4 assists)#ARSBHA was the first time he’s both scored and assisted in the same match ⚽️🅰️@OfficialBHAFC pic.twitter.com/SAsbBvu0ui

The Zambian was making his first start since January and produced a remarkable performance on his return, the midfield make-up of Mwepu, Yves Bissouma and debutant Moises Caicedo one that will excite the Seagulls’ supporters.

Kevin De Bruyne often turns up on the biggest occasions and the midfielder was a menace to Liverpool during the huge clash at the Etihad this weekend.

The division’s top two shared the points after an entertaining 2-2 draw, with De Bruyne having opened the scoring with a deflected effort inside the opening minutes.

Kevin De Bruyne has now scored more goals with his left-foot than his right-foot in the Premier League this season:

Fabinho endured a torrid time attempting to deal with De Bruyne in his advanced role and the Belgian continually bypassed Liverpool lines with surging runs or precise passes in behind.

He could – and perhaps should – have created a winning goal as a tight offside on Raheem Sterling and Riyad Mahrez’s wastefulness denied De Bruyne another assist after defence-splitting passes.

Chelsea’s best performances often come when Mason Mount performs and this weekend’s win at Southampton was a welcome return to form for both club and player.

Mount was handed a free role behind a front pairing of Timo Werner and Kai Havertz and caused problems for the Saints all afternoon, his intelligent off-the-ball movement and work-rate inspiring Chelsea to a thumping 6-0 win.

The England midfielder teed up Marcos Alonso’s opening goal with a clever flick into the onrushing Spaniard, before opening his account with a sweet strike from just outside the area.

Mason Mount in the Premier League for Chelsea this season…

• Most goals
• Most assists
• Most big chances created pic.twitter.com/k0uKSFkDyS

The Portsmouth fan will have revelled in a demolition job on the South Coast and added his second goal of the game in the second period as Chelsea equalled their biggest ever Premier League away win.

Son was at his clinical best as Tottenham beat Aston Villa to open up a three-point lead to Arsenal in the race for Champions League football.

The South Korean opened the scoring inside three minutes with a crisp left-footed strike that went in off the post, before helping himself to a hat-trick as the familiar Son-Kane combination exposed the home side’s frailties.

Son needed just three shots to score his hat-trick at Villa in a ruthless performance from the forward, who now has more non-penalty goals than Mohamed Salah in the Premier League this season.

Timo Werner must wish he could play against Southampton every week with the German forward continuing his excellent record against the Saints this weekend.

Werner scored twice and in truth could have had five, hitting the woodwork on three occasions as Southampton’s high defensive line struggled to cope with his speed and movement.

The 26-year-old has now scored more goals in four appearances against Southampton (5) than he has managed in 47 against every other Premier League team combined (4) since joining Chelsea.

Werner took his opportunity to impress against Southampton and Thomas Tuchel will hope this performance can instil confidence into a forward whose relentless running has deserved a fortuitous break.

For the second game running Harry Kane orchestrated a big win for Spurs despite failing to get on the scoresheet, with the England captain providing two assists in the 4-0 success at Aston Villa.

Kane has been in fantastic form in recent weeks and continued his creative influence against Villa, his awareness picking out both Dejan Kulusevski and Son Heung-Min in the second half as Spurs’ new-look front three continue to shine.

The 28-year-old’s blocked shot had earlier led to the opening goal of the game, before two cute headers saw Kane move to eight assists for the campaign.

It’s now 11 goal involvements in his past seven Premier League games – including five assists in his last three – for Kane, who has found his form at a crucial time in Spurs’ pursuit of Champions League football.