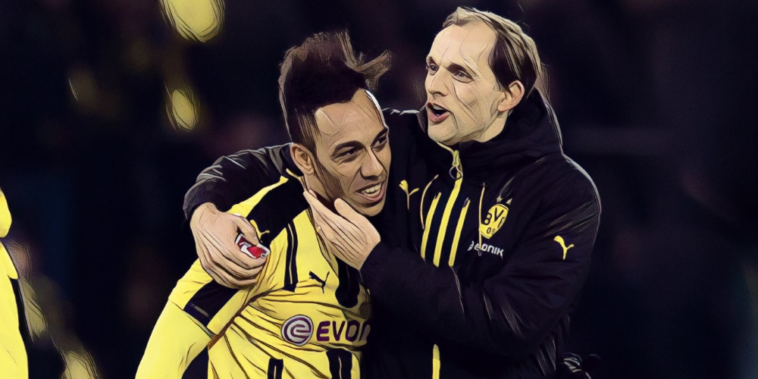 Thomas Tuchel has recalled his memories of working with ‘crazy’ Pierre-Emerick Aubameyang as Chelsea prepare to face Arsenal in the Premier League.

The clash will see Tuchel come up against one of his former players in Arsenal captain Aubameyang, having coached the Gabon international during his time in charge of Borussia Dortmund.

Aubameyang enjoyed arguably the best period of his career under the management of Tuchel, scoring 79 goal in just 95 appearances across all competitions and finishing as the Bundesliga’s leading scorer during the 2016/17 campaign.

Ahead of tonight’s meeting, Tuchel was asked if he would be keen to take Aubameyang to Chelsea.

“He does not get younger, that’s the problem,” told his pre-match press conference.

“Maybe he arrived five minutes late on the training ground, that can happen with him! But if he does this, he is in a hurry, he excuses, he feels sorry, he has still a smile on his face.

“Yeah, it was a very reliable relationship because he delivered an unbelievable amount of goals, his speed was unique in Bundesliga and he was a crucial player. It was a pleasure to work with him, always a smile on his face, very, very honest guy.

“A bit of a crazy guy, but this is nice crazy. We still are in touch from time to time and exchange messages when some of us has a big win. In some way, he will still always be my player and feels like he will always be my player, so you want him to succeed and have a good time wherever they are.