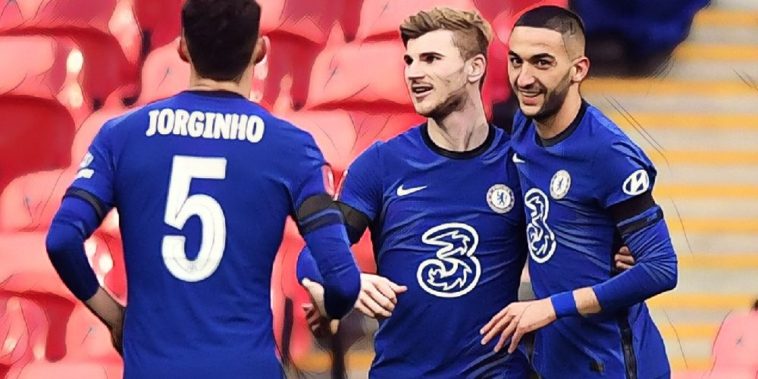 Hakim Ziyech struck early in the second half to book Chelsea’s place in the FA Cup final, while also ending Manchester City’s hopes of an unprecedented quadruple.

Man City made eight changes to the side that beat Borussia Dortmund on Wednesday, and it was perhaps because of that that Chelsea settled into the game the quickest, the London side seeing an early Ziyech goal ruled out following a swift Timo Werner break down the left.

Both sides have become accustomed to enjoying plenty of possession under Pep Guardiola and Thomas Tuchel respectively, and it would turn out to be an even and tactically intriguing first half, although it wasn’t particularly exciting, with neither ‘keeper troubled.

Chelsea would however take the lead within 10 minutes of the restart, and the goal was almost a carbon copy of the disallowed effort early in the contest, Werner this time staying onside as he scampered in behind the City defence before squaring it to Ziyech who had the simplest of tasks in tucking the ball home.

City ‘keeper Zak Steffen was partially at fault for the Chelsea goal, coming off his line to close down Werner’s run, though the American made a crucial save to deny Ziyech minutes later to keep the score at 1-0.

City notably improved after Guardiola replaced the relatively anonymous Ferran Torres with Ilkay Gundogan just after the hour mark, although while they really forced Chelsea back they still struggled to properly test Kepa Arrizabalaga.

The Stamford Bridge outfit would see another goal ruled out as the game approached added time, though it would matter little as they held on to book their place in a fourth FA Cup final in the last five seasons.

Speaking afterwards, Chelsea boss Tuchel was delighted with his side’s performance and spoke of his pride to reach the Cup final.

“It was a very, very strong performance. Very happy and proud,” he told the BBC.

“We played an excellent 35 minutes in the first half. We had to suffer for 10 minutes. We then played another 30 minutes so strong and got the lead, could have got another. It was a very strong performance and I am very proud of my team. Very happy they performed to this level today. I am happy. Everybody who is on the pitch needs to perform.”

Chelsea were well organised in defence to keep City at bay in the second half, the Blues continuing their impressive defensive record under Tuchel, and the German praised his side’s togetherness and bravery, City failing to score in a game for only the second time since November.

14 – Since Thomas Tuchel’s first game in charge of Chelsea in January, the Blues have kept more clean sheets in all competitions than any other side in the top five European leagues (14). Organised. #FACup pic.twitter.com/UYnsuRWSUm

“A good defence is also having the ball and ball possession. It is a very good clean sheet. We were not lucky to escape with a clean sheet, we worked hard for it.

“The guys are ready to cover for each other if anyone loses a duel. We wanted to be brave today with the ball and against the ball and we did it. So happy.

“It feels fantastic because we were playing the best team in Europe right now and we managed to close the gap for 90 minutes. We played a very strong first 35 minutes and in the second half another strong half an hour.

“At the end of each half we had to suffer and we also needed a bit of luck but it was a deserved win. I am so proud because it is so hard against City, you have to be on your top level. It was a quality performance.”

Asked about Ziyech’s goal, Tuchel added: “It was very nicely played. We escaped the pressure and we had a deep run from Mason [Mount] and the run from Timo. Hakim could finish from Timo’s [Werner] delivery which was crucial because it was decisive.

“We had a big chance with Timo, a big chance with Ziyech and two offside goals, so it would have been possible to be more calm in that last 15 minutes but I like the effort and hard work. It was a good mix between ball possession and defending.”

Next up for Chelsea is a home game against Brighton in midweek before facing West Ham in a potentially decisive game for the top four.