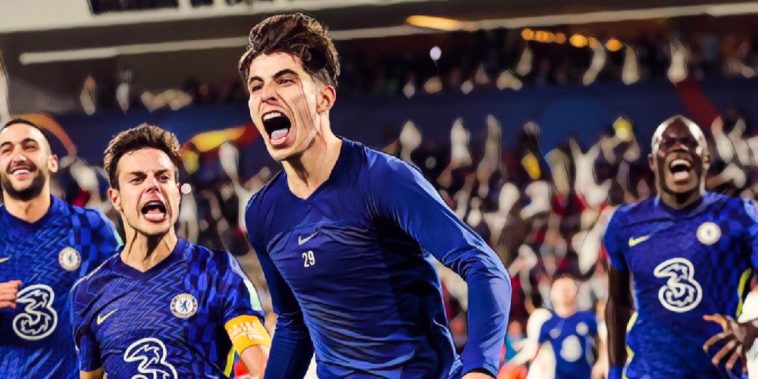 Chelsea are the new World Champions of club football, beating Brazilian side Palmeiras 2-1 after extra time in Abu Dhabi.

Both sides came into the game looking to claim the Club World Cup for the first time, Chelsea having been beaten by Corinthians in the final back in 2012, while Palmeiras finished fourth in last season’s edition of the competition.

In terms of performance, it was much of what we have seen in recent weeks from Chelsea, the Premier League side seeing plenty of possession but with very little cutting edge in front of goal, while the Brazilians attempted to keep it tight and hit on the counter.

Chelsea would finally provide a moment of quality 10 minutes into the second half, Callum Hudson getting down the left before picking out Romelu Lukaku in the middle of the box, the Belgian despatching a thumping header past Weverton.

Nine minutes later though and Palmeiras were quite literally handed the chance to draw level, the ball hitting the raised arm of Thiago Silva while challenging for a header, with VAR advising the referee to award a penalty. Having scored and assisted in the semi-final win over Al Ahly, Raphael Veiga stepped up and coolly converted from the spot, sending the returning Edouard Mendy the wrong way.

Chelsea continued to dominate, but were wasteful throughout, with the game going to 30 minutes of extra time in which both side’s looked tired.

It looked as though the game was heading to penalties, but with just minutes of extra time remaining though, Chelsea would then be the side screaming for a penalty, the ball striking the hand of Luan from close range. After consultation with the pitchside monitor, the Italian referee would once again point to the spot, and having scored the only goal in the Champions League final last summer, Kai Havertz stepped up to confidently slot home the penalty.

2 – Kai Havertz is the first player to score the match-winning goal in the both the UEFA Champions League final and then the subsequent FIFA Club World Cup final since Lionel Messi for Barcelona in 2011. Occasion. pic.twitter.com/HD9YOX9U9y

Luan was eventually sent off in the fifth minute of added time for a lunge on Havertz with the German racing towards goal, before the referee finally blew the full-time whistle to confirm Chelsea’s status as World Champions.

Thomas Tuchel missed the semi-final win over Al Hilal due after contracting Covid, though he was able to jet out to the Middle East on Friday night after returning a negative test to take his place on the bench.

Speaking afterwards, the Blues boss said his side ‘deserved’ the victory for their ‘relentless’ display: “In the end if you score late you need luck to do it but we were relentless and we did not stop trying,” he told Channel 4.

“We did not give in. We had the lead then lost it but never stopped. It was deserved but also lucky when you score late.

“The penalty does not look nervous [from Kai Havertz] but for sure he was. You cannot not be nervous in this situation. We trusted the statistics and I’m happy for him.”

The win means Chelsea have now won every single trophy available to them, and when asked about that achievement, the German said: “I’m a part of it and I’m happy to have the chance. We said before in the dressing room ‘what an opportunity’.

“We all dream to have finals like this. There is no regrets. There are still things to win and it never stops.”

Chelsea get back to action next weekend, hosting Crystal Palace in the Premier League before the defence of their Champions League crown continues the following week.