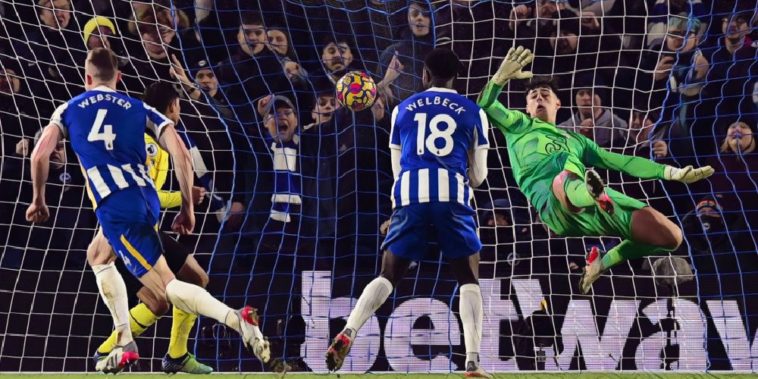 Chelsea dropped yet more points as they were held to a 1-1 draw by an impressive Brighton side at the AmEx.

The two sides only met three weeks ago, Romelu Lukaku opening the scoring in the first half at Stamford Bridge, only for Danny Welbeck to net a 91st minute equaliser for the visitors.

Chelsea came into the game with just one win in their last six to fall 13 points behind Manchester City to effectively end their title hopes, with this game having been brought forward to accommodate their trip to the World Club Cup next month.

It was Brighton who settled into this one the quicker of the two sides, the Seagulls looking by far the hungrier as they closed Chelsea down all over the pitch, and could have opened the scoring within the opening few minutes, some slick interplay ending up with Jakub Moder narrowly dragging an effort wide.

However, just as it was in the reverse fixture, Chelsea took the lead just before the half hour mark with what was one of their first forays forward. N’Golo Kante received the ball on the edge of the box, laid it back to Hakim Ziyech who drilled a low effort into the back of the net, his effort from 25 yards flying in despite a Robert Sanchez getting a firm hand to it.

The South Coast club picked themselves up and again started brightly after the interval, with Welbeck squandering a couple of early chances, before they finally pulled themselves level on the hour mark. A corner from the Brighton left was met by a thunderous header from Adam Webster, though Chelsea’s zonal marking was far too static with nobody picking up the defender’s run.

Following the goal, Brighton continued to probe and would squander a number of highly presentable chances, while Chelsea were also unable to find a winner as they had had the best of the last 10 minutes or so.

Overall though, it was a fairly underwhelming display from the European champions, and speaking afterwards, Thomas Tuchel said his side were both ‘mentally and physically tired’ after playing 15 games in all competitions since the start of December.

“We looked tired and we are. It’s like this,” he told BT Sport. “We knew they were well prepared, had more time to prepare and you saw at the end that the stadium celebrated like it was a victory. That is what you face. We tried everything but you could see we were mentally and physically tired.

“I did not see many teams control Brighton over 90 minutes. They play brave and bring people to your box to create chances. Of course if you can take a half-chance for a second goal you can go out and win and this is what we normally would be up to. At the moment it is difficult to be too harsh on our players as I know what is going on.”

“I am happy. He can score 20 more and not celebrate I have no problem. It is normal that they talk, are not happy and don’t like it if we say we want more from them. Even in the reaction for the goal you can see they are tired. It is relief. That is my feeling of the team just now.”

Next up for Chelsea is a home clash against top four chasing, London rivals, Tottenham.

Read – Rooney and Lampard set to have Everton interview