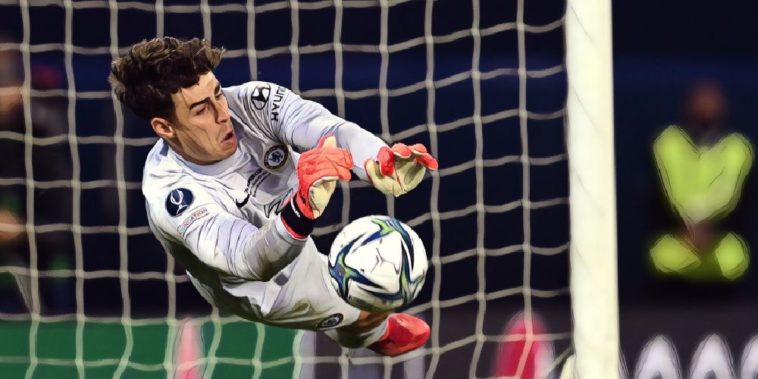 Kepa Arrizabalaga was the hero as Chelsea got their season underway with silverware in Belfast, beating Villarreal on penalties to lift the UEFA Super Cup

Chelsea started much where they finished off last season, instantly getting on the front foot and not showing any signs of pre-season rustiness as they dominated possession from the off, creating a number of decent chances in the opening stages.

The much-deserved breakthrough came in the 27th minute, Marcos Alonso playing a ball down the line to Kai Havertz who cut it back toward the penalty spot where it was met by Hakim Ziyech, the Moroccan finding himself in a yard of space and steering his effort into the ground and into the back of the net.

Villarreal did fashion a couple of very presentable chances either side of the break, former Liverpool full-back Alberto Moreno crashing a volley off the underside of the bar, before Gerard Moreno saw an effort tipped onto the post by Edouard Mendy – the Chelsea ‘keeper redeeming himself following a poor goal kick.

While it was all Chelsea domination before the break, the Europa League winners were much improved afterwards, with debutant Trevoh Chalobah impressing in the Chelsea backline as Los Amarillios looked to get back into the game.

On a number of occasions, Chelsea looked sloppy, and it was their sloppiness that saw them pegged back. A loose ball was intercepted in midfield, before last season’s 30 goal man Moreno played a one-two with Boulaye Dia, before placing it into the top corner beyond Mendy.

The game went into extra time, where substitute Christian Pulisic squandered a glorious opportunity while Sergio Asenjo denied Mason Mount as the deadlock couldn’t be broken and the game went to penalties.

There were some eyebrows raised when Thomas Tuchel decided to bring on Kepa Arrizabalaga for the shootout, though it would turn out to be an inspired decision. The Spaniard kept out Aissa Mandi’s effort to bring the scores level after Kai Havertz had missed his kick, before Kepa went on to smartly save the seventh spot-kick from Raul Albiol.

Speaking afterwards, Tuchel explained his decision to change ‘keepers for the shootout.

“It was not spontaneous,” he told BT Sport. “We talked about it with the goalkeepers when we came in and had the first cup game against Barnsley, so we had some statistics.

“We were well prepared that Kepa is the best in percentage at saving penalties. The analysing guys, the goalkeeping coaches showed me the data, we spoke with the players that this can happen when we play in knockout games.

“It’s fantastic how Edou accepts it, it’s fantastic how this talk went the day before the Barnsley game, and since then they know. Of course, we needed to do what is best for the team, we made the change and it worked.

“There is proof that Kepa is better in this discipline and these guys are true team players, and I am happy for Kepa and for Edou. To have a goalkeeper like this, he is happy to do it for the team.”

Asked about the game itself, Tuchel said: “Was tough. 120 minutes.

Chelsea face Crystal Palace in their opening game of the season at the weekend and Tuchel said admitted the game going to extra time was less than ideal preparation.

“Mentally it’s a good one. Physically it’s the worst thing that could happen. Victory and a trophy helps to regenerate, and we have to be careful.”