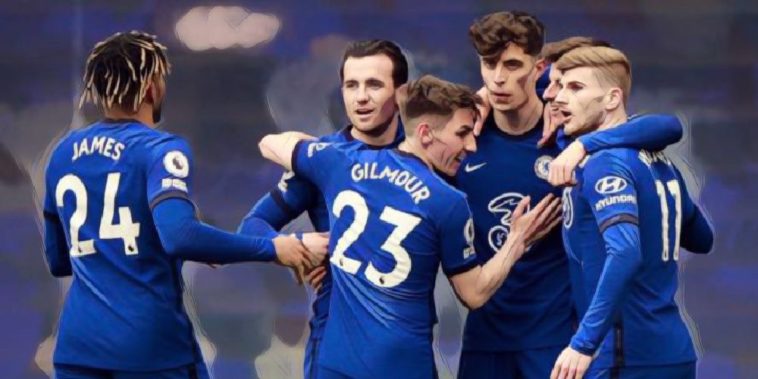 Kai Havertz continued his recent upturn in form as he helped Chelsea to a 2-0 over west London rivals Fulham, bolstering his side’s pursuit of a top-four finish.

Despite a positive start by Fulham, Chelsea would take the lead inside the opening 10 minutes. A long ball from Thiago Silva from inside his own area was sublimely controlled by Mason Mount, the England international threading a perfectly weighted pass through the Fulham defence into Havertz who slipped it past Alphonse Areola.

Edouard Mendy was forced into a smart save to deny a low Ademola Lookman strike, while Areola would produce an excellent save to his right to prevent Hakim Ziyech from extending the Blues’ lead before the break.

They would however double their advantage within four minutes of the restart, a cross-field diagonal ball from Ben Chilwell found goalscorer Havertz on the right, the Germany international darting inside, exchanging passes with countryman Timo Werner, before sliding it past the Fulham number one.

The second seemed to knock the stuffing out of Scott Parker’s side, the defeat leaving them nine points from safety with just four games left to play, with Newcastle yet to play this weekend.

As for Chelsea, the win opens up a six-point gap to West Ham ahead of their trip to face Burnley, with Liverpool a point further behind ahead of their game against Manchester United in the race for Champions League qualification.

Speaking after the game, Thomas Tuchel was full of praise for Fulham, and said his side responded to their threat with a ‘spot on’ performance.

“You cannot get confused with the table. That’s why I have the highest respect for what we did today. It was tough for us physically but we hang in the game. We could decide the match earlier but it was a tough one and a very important win.

“We were spot on. It was what we demanded from ourselves. We showed the pride we are capable of – to do it in between two big games. We worked so hard against West Ham to be in this situation and I’m beyond happy that we did it. There was no lack of concentration. We had some trouble which everyone against this Fulham side has but there was no lack of concentration and that was key.”

Kai Havertz has struggled for form and consistency since his club-record move to Stamford Bridge in the summer, his brace against the Cottagers taking his goal Premier League tally to just four.

Tuchel has utilised the 21-year-old as a false nine in recent weeks, a positional shift that has seemingly paid dividends following a string of improved performances, and the Blues boss was pleased with his match-winning display.

“For sure, this is what we want if someone gets his chance. He scored two decisive goals and he was involved along with Timo [Werner] – two very good performances from our strikers how it should be.”

Mason Mount was once again excellent for Chelsea, though had to be withdrawn with 14 minutes left to play, and Tuchel is hopeful that the influential youngster will be fit for the midweek Champions League semi-final second-leg against Real Madrid. “I hope really that Mason is not a big thing and hopefully he can fully recover for Real Madrid.”