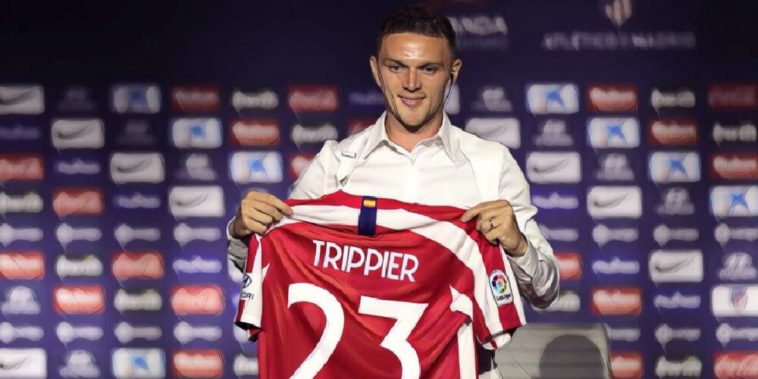 Kieran Trippier says the opportunity to work under Diego Simeone was a major factor in his decision to join Atletico Madrid.

The England international completed a £21.7m move to the Spanish capital this week, leaving Tottenham after four seasons with the North London side.

The 28-year-old has revealed Atletico boss Simeone was key to his decision to leave the Premier League, praising the Argentine as ‘one of the best managers in the world’.

“He was massive,” he told the media at his unveiling on Thursday.

“From watching Atletico over the years you see what he demands of his team, the work ethic. They give everything for the team, the badge. It’s like a big family here and I wanted to be a part of this.

“For me, he’s one of the best managers in the world and it’s an absolute privilege to play for him and give everything I can for him.”

He added: “Obviously the Premier League is one of the best leagues in the world, but when Atletico Madrid were interested I didn’t think twice.

“It was a great opportunity for myself, my family, to come and live in Madrid and experience it.

“Me and Mauricio [Pochettino] had a conversation about my future. I explained there was a big opportunity at Atletico Madrid and it was an opportunity that I didn’t want to turn down.”

Trippier joins the growing trend of English players opting to ply their trade abroad, following in the footsteps of Borussia Dortmund winger Jadon Sancho, and the former Burnley full-back says he will do all he can to adapt to Spanish culture, insisting he will begin to learn the language ‘straight away’.

“The most important thing is to get involved in the culture of the players and learn the language,” he added.

“My main priority is to learn the language straight away, to make it easier for my family and just enjoy playing for Atletico and living in Madrid.

“I’ve always wanted to speak Spanish anyway and this gives me a better opportunity to do that.”