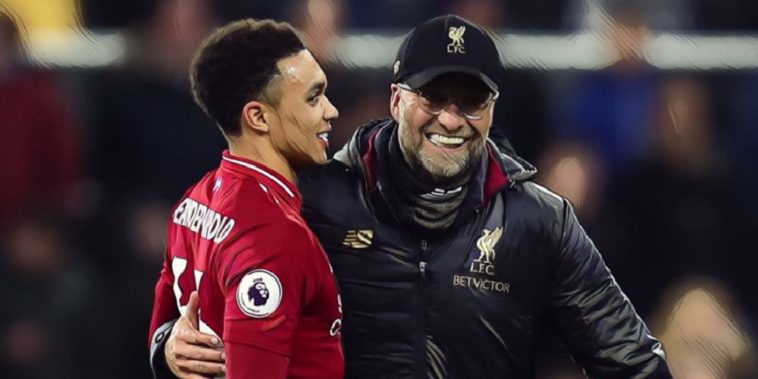 Trent Alexander-Arnold has lavished praise on Jurgen Klopp and admits he owes the Liverpool manager ‘everything’ for his success so far.

The Liverpool boss celebrated four years in charge at Anfield this week, with the German bringing Champions League success to Merseyside last season and transforming the club into one of Europe’s finest sides.

Alexander-Arnold was also celebrating this week as he turned 21 on Monday, and praised the influence of Klopp when reflecting on a career that has already seen him lift Europe’s biggest prize and develop into a fully-fledged England international.

When asked at a press-conference what Klopp has done for his career, Alexander-Arnold said: “Everything, really. Without him, who knows what would have happened.

“He’s put a lot of trust and faith in me personally and I’ve tried to repay him every time he’s done that.”

Alexander-Arnold has recalled Klopp’s first weeks in charge of the club, admitting that the manager’s appearance at the club’s academy gave Liverpool’s brightest prospects hope that they would be handed an opportunity.

“Within his first few weeks he was down at the academy watching the young lads, and that almost gave us a bit more faith and gave a statement to the club that he is going to use young players and give us those chances,” said the 21-year-old.

“He’s shown over the four-year period that he has given those young players their chances and given them opportunities and obviously I’m one of the youngsters that have been given them.

“A massive thanks to him, and hopefully there will be four more years of success.”