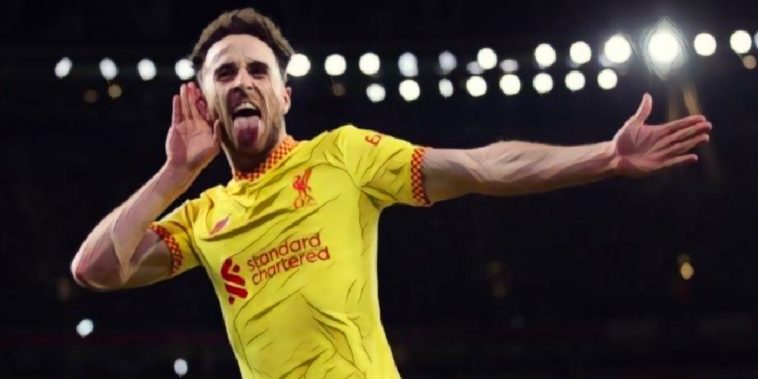 Having played out a goalless draw in the first leg last week at Anfield, it was Arsenal that started the brighter of the two sides at the Emirates, with an Alexandre Lacazette free-kick forcing a superb flying save from ‘keeper Caoimhin Kelleher who tipped the ball into the bar.

However, despite being without Mohamed Salah and Sadio Mane, it would be Liverpool who took the lead, Diogo Jota picking the ball up on the left before driving inside. The Portuguese brushed aside the challenge of Takehiro Tomiyasu before his scuffed effort seemingly wrong-footed Aaron Ramsdale who was unable to keep it out.

Both sides blazed efforts over the bar in the opening exchanges of the second half, while substitute Ibrahim Konate saw a header crash off the base of the post as both sides looked to add to the scoreline.

The second did eventually come with 13 minutes to play, however, Trent Alexander-Arnold halting an Arsenal breakaway down the left, before looking up and pinging the ball in behind the Gunners defence. His inch-perfect pass picked out the run of Diogo Jota who controlled on his chest before lifting it over Ramsdale, and while the assistant referee initially ruled it out for offside, VAR showed that the Portuguese had timed his run to perfection to give Liverpool a 2-0 lead.

Thomas Partey returned into the UK at lunchtime today following Ghana’s elimination from the African Cup of Nations, though having been brought on as a 74th minute substute, the 28-year-old barely had time to get his kit dirty, as he foolishly received two yellow cards within the space of a couple of minutes to pick up the 14th red card for the Gunners since Mikel Arteta’s appointment.

Speaking immediately after the game, Trent Alexander-Arnold said he was ‘looking forward’ to featuring in his first Wembley final, before hailing goalscorer Jota as a ‘world class’ talent.

“Looking forward to it a lot, good for us to get there and what we expect. We put in good performances on this run, we have had young players but managed to win the games. We performed well tonight and what we deserve.

“We never gave them too many chances and kept them at bay. Diogo Jota’s first goal was outstanding and so was the second. He is a world class player in the best form at the club so far, hopefully more goals from him. Hopefully we can win the final.”

Alexander-Arnold’s performance saw him pick up his 13th and 14th assists of the season, and the England international is keen to continue racking up up his stellar numbers.

14 – Trent Alexander-Arnold has made 14 assists for Liverpool in all competitions this season, the most of any Premier League player; indeed, no one else has more than 10. Delivery. pic.twitter.com/hIqVsBP1Q5

“Of course. The number is good and the standard I set myself. I want to create and provide for the team, I created two more today and whoever is on the end to finish it off.”

The Reds will take on Chelsea in the Wembley showpiece next month, and Alexander-Arnold is looking forward to challenging for silverware in front of a capacity crowd having won the 2019 Premier League title at an empty Anfield.

“It is what we want, it was not the same when we left Anfield as an empty stadium. It has been a while to lift a trophy and it is good for us to be in a final. There are still 90 minutes to do that against a top side.”