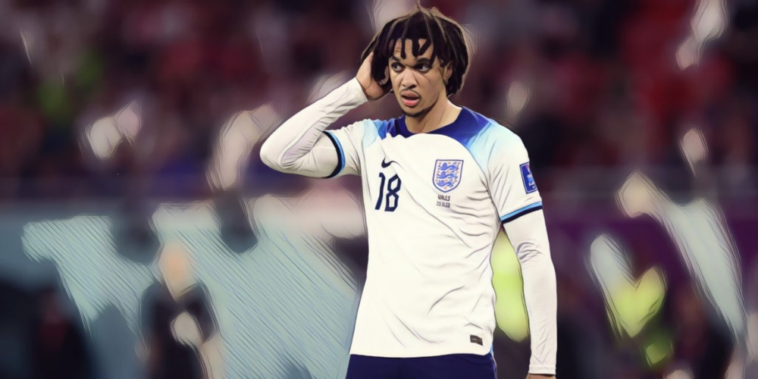 Trent Alexander-Arnold has hit back at ‘lazy’ criticism over his defensive ability and believes that he is ‘held to standards that other players aren’t’.

Alexander-Arnold has become a polarising figure among football experts, with the 24-year-old criticised this season for his defending during a difficult start to the season at Liverpool.

The England international has set unprecedented standards for goal creation from full-back in recent Premier League campaigns, but there remain those sceptical about the defensive side of his game at the highest level.

Alexander-Arnold has fired back at is critics however, calling the perceptions over his defensive ability ‘lazy’ and suggesting others defenders are not held to the same standards.

“It’s the lazy thing to say,” he told talkSPORT. “People just watch the game and see what they want to see. There’s kind of that prejudice, I believe now. You see what you want to see at the end of the day.

“If you go to watch a game and have a perception that a player is lazy and you see them once not running, then in your mind they’re lazy. You see what you want to see, you don’t see the rest of the game where they’re running around, trying to do their thing.

“I suppose that’s where I feel like I’m judged. People go to games or people watch me play football with a preconception of ‘he’s not a good defender’ or ‘he can’t defend well’, so when I do have that one mistake or that one time someone gets past me, then that confirms what they think.

“At times it feels like it doesn’t matter how well I do, if I’m not perfect in that respect then it’s not good enough. I’m held to standards that potentially other players aren’t held to but that’s life, you’ve got to get on with it.”

Alexander-Arnold received notable support from a well-respected figure this week, with Brazil legend Cafu questioning his absence from the England team.

Cafu – who featured in three World Cup finals for Brazil and captained the side to success in 2002 – stated that he sees similarities between Alexander-Arnold and himself, and his view that the Liverpool star was one of the best right-backs in the world.

“It’s high, high praise,” Alexander-Arnold said on Cafu’s comments. “When you think of those two names (Cafu and Roberto Carlos), you probably think of the two best full-backs in history really. There’s a couple others that sneak into that conversation but them two are always in everyone’s conversation.

“So, for them words to be spoken is really nice. It’s just special to know that people like that see the game in a way that they understand me. I feel like sometimes as a player I might be a little bit misunderstood, but to feel like I’ve been understood by them is nice.”