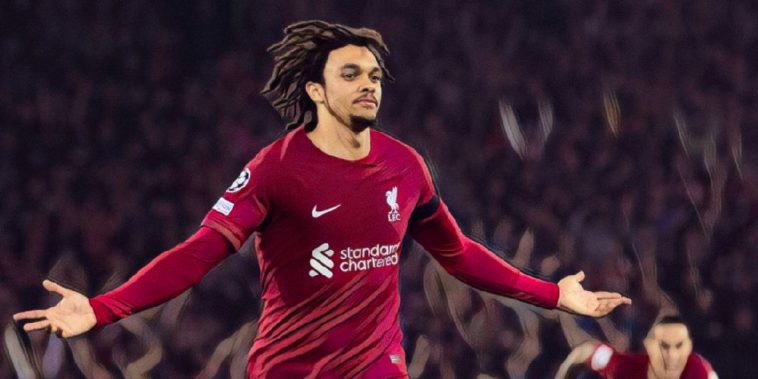 Liverpool established themselves in second place in their Champions League group following a comfortable 2-0 win in the Battle of Britain clash against Rangers.

After several years of remarkable consistency, Liverpool have had a surprisingly inconsistent start to the current campaign with a number of star players not performing to their usual high standards.

One player who has come under renewed criticism for his defensive displays in recent weeks is Trent Alexander-Arnold, though it was the scouse star who opened the scoring in just the seventh minute following a bright start by the hosts. Liverpool were awarded a free-kick 25 yards from goal, with the 23-year-old stepping up and firing an absolutely unstoppable curling effort into the top left-hand corner.

After scoring seven minutes into the first half, Liverpool doubled their lead eight minutes into the second, Luis Diaz’s strong driving run into the box being brought down by Leon King, before Mohamed Salah fired the resulting penalty straight down the middle.

Liverpool looked much like their usual selves, and they could have had many more if it weren’t for a number of vital saves by Rangers’ veteran ‘keeper, Alan McGregor, the pick of the bunch being to deny Diogo Jota in the second half.

Rangers did create a couple of chances for themselves late on in the game, Kostas Tsimikas clearing off the line while Alisson made a good save to deny Antonio Colak.

Speaking after the game, goalscorer Trent Alexander-Arnold said that their performance was much better than they produced during the 3-3 draw with Brighton at the weekend.

A perfectly placed free-kick puts Liverpool ahead against Rangers 👌

“The performance was great from the lads,” he told BT Sport. “On Saturday it was disappointing. We never got going, our press wasn’t there, we were slow out the blocks. But it’s the complete opposite today. We started well and continued throughout the game. They had their spells and the second half was tough but overall we played outstanding.

“I don’t normally score from that side. I usually score from the other side of the pitch. It was just about getting it on target, that’s what I’ve been focusing on when I practice. If you hit the target, there’s always a chance it goes in or you get a rebound.”

Asked about the criticism he has faced, the right-back admitted it has been a slow start for him personally.

“No matter what, I always try to think positively. People say things but for me it’s all about performing for the team. That’s all that matters, getting wins and helping the team. It’s been a slow start to the season for me but I’m looking forward to the rest of the season.”

Jurgen Klopp changed the formation for this evening’s encounter, and Trent felt like the new shape helped the players.

“We went back to a basic 4-4-2 and played it really well, shifted across the pitch well. We made it compact, they couldn’t play through us, they were playing long balls and we picked them off.

“This year is going to be very intense. It’s what we’re used to, three games a week. There’s no excuses. With the games coming thick and fast, it’s exciting for us.”

The result leaves Liverpool three points adrift of Napoli in Group A at the half way stage, and three ahead of third placed Ajax.