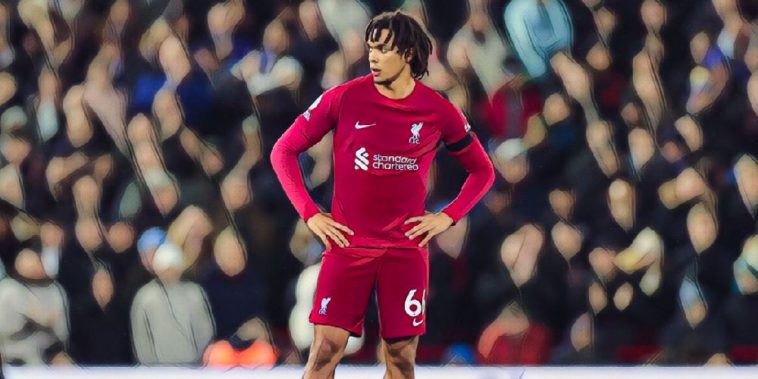 Trent Alexander-Arnold offered an honest assessment of Liverpool’s performance as they beat Leicester 2-1 thanks to two Wout Faes own goals.

Leicester got off to the perfect start, stunning the Anfield crowd into silence as they took the lead in the fourth minute. A goal kick from Danny Ward was steered to Patson Daka, who then touched it into the path of Kiernan Dewsbury-Hall. The Reds missed a number of challenges in the buildup before the midfielder surged through their defence and slotted beyond the onrushing Alisson.

The Foxes were poor in their Boxing Day defeat to Newcastle, though seemed right up for the fight in this one, and looked particularly dangerous on the counter.

Liverpool seemed to lack their usual cohesion, but would be gift-wrapped an equaliser seven minutes before the interval, a tame Trent Alexander-Arnold cross from the right being turned into his own net by Wout Faes; the Belgian miscueing his attempted clearance that looped up and over his ‘keeper who had shouted for the ball.

Incredibly, in the last minute of the first half, Faes had another own goal against his name as Liverpool took the lead. Darwin Nunez’s blistering pace got him in behind the Leicester defence, and while he again failed to hit the target, his effort came back off the post and onto the legs of the centre-back who was unable to prevent the ball from going into his own net.

2 – Wout Faes is the fourth player with two own goals in a single Premier League game, after Jamie Carragher (1999, Liverpool vs Man Utd), Michael Proctor (2003, Sunderland vs Charlton) and Jonathan Walters (2013, Stoke vs Chelsea). Accomplice. pic.twitter.com/KXuyFExLtP

The second half continued in a similar fashion with chances being squandered at either end, though neither side could add to the scoreline in what was otherwise an entertaining game.

Speaking after the game, Trent Alexander-Arnold admitted that Liverpool were a long way from their best, but insisted that claiming three points was the most important fact.

“It’s all about getting three points and trying to get into a position in the league where we feel like we need to be and haven’t been this season,” he told Sky Sports. “These are the ones that you look back on and know that you needed to win it. Whether you win well or ugly, it doesn’t really matter.”

“We lacked intensity. I don’t want to say we got bullied but they were winning the second balls and playing around us. They had a lot of men in midfield and outnumbered us. They found it way too easy. We should have made it a lot harder for them. That’s what we pride ourselves on: our intensity and pressing straight out of the blocks. It just wasn’t there today. Their goal took us by surprise.”

Not for the first time this season, Liverpool looked shaky at the back, and the full-back was asked about his side’s lack of defensive solidity.

“I’m right up there pressing the left-back, and that’s when we kind of leave ourselves a bit exposed if we don’t get it right. The goal kick took Joel [Matip] a bit by surprise when it came short, and then it got a bit scruffy. I haven’t watched it back but I think Robbo got caught in two minds. You couldn’t catch up then, and it was a good finish.”

Trent has regularly been criticised for this defensive abilities, but did well in dealing with the threat of Harvey Barnes down the Leicester left wing.

“Part of me thinks there’s been a lot more of a spotlight on it because of me not playing at the World Cup,” he said of the criticism of his performances. “In some situations, I’ve not helped myself. There were situations at the start of the season that could have been better, I’ll hold my hands up about that.”

The win moves Liverpool to within two points of the top four and 12 points off the top, though Arsenal do possess a game in hand, and the 24-year-old revealed that the Merseysiders haven’t given up hope of the title, but accepts they already need a ‘miracle’.

“We’re realistic, the aim going into the season is always to win the league, or at least be in and around it, like last season – pushing City to the final day.

“I think, right now, when you look at it, we’re 15 points behind Arsenal, so you’re hoping for a miracle.”

Next up for Liverpool is a trip to take on Brentford on Monday evening.