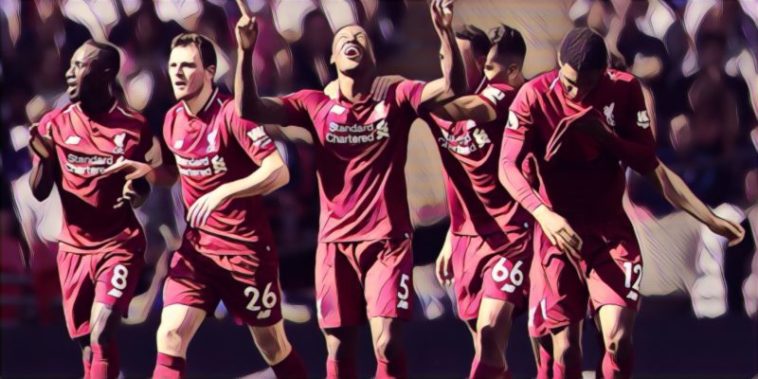 Liverpool walked out 2-1 winners against Tottenham after a performance that deserved a more comprehensive victory.

Mistakes and poor goalkeeping contributed to both of Liverpool’s goals and Tottenham had no reply until injury time, by which it was too late. Jurgen Klopp’s side were well-organised from start to finish and there were limited opportunities for Tottenham to get back into the game. Here’s how the players rated:

At fault for both of Liverpool’s goals, messing up a clearance from a corner for the first and letting the ball slip through his hands for the second. Rescued his rating slightly with a couple of crucial saves at other times in the game to stop Liverpool scoring 4 or 5.

Very little attacking impact, and defensively was left exposed by Mane multiple times during the game.

Solid and made few mistakes, but couldn’t resist the attacking prowess of the Liverpool forwards. At fault for the first goal when his pass was blocked by Mané.

As with Alderweireld, didn’t do too much wrong but were exposed far too frequently by the Liverpool attackers. Had no reply to their speed and passing.

Spent a lot of time out wide and in attacking positions leaving his fellow defenders exposed. Offered very little in attack too.

Misplaced far too many passes and seemed desperate to assist Mo Salah with a back pass that played the Egyptian attacker in on goal.

Made no impact on the game and didn’t look completely comfortable starting his first game since being injured.

Had a brilliant first half and ran rings around the Liverpool players, but didn’t make any difference to the game.

Tried his best to create chances but his efforts came to nothing on most occasions. Not on his best form but his corner did manage to find Lamela for the consolation.

Looked Tottenham’s most dangerous player by far, adventurous and creative with his play. Could’ve changed the game if his shot at 1-0 down had gone in but all-round a good effort.

Extremely few chances and was unable to compete with van Dijk throughout the game.

Dynamic and energetic after coming on, scored a good goal to deny Liverpool the clean sheet.

Looked good on the ball but couldn’t make his last-minute chance count.

The Brazilian had very little to do all game, but was solid when called upon. Could do nothing to stop Lamela’s goal late on.

As with all the Liverpool defenders, TAA didn’t put a foot wrong, keeping the Spurs attackers at bay.

Solid but wasn’t given much to do by the Tottenham attackers.

Won every ball in the air, and made no mistakes throughout the game. Made himself a nuisance for Vorm which led to the first goal.

Characteristically consistent performance, good in both defensive and attacking duties.

Great performance in midfield and got himself on the scoresheet with a good header to take the lead.

Never stopped working and kept the Liverpool engine running throughout. Won’t take any headlines but an important team player.

Should’ve had a goal and continued to dominate the midfield for Liverpool.

A constant threat for Liverpool, latching onto loose passes and using his speed to terrorise the Spurs defenders. Deserved a goal for his efforts.

Scored a fortunate but deserved goal after doing what he does best as the Liverpool centre forward; linking really well with the wingers and not giving defences a moments peace.

Didn’t get a goal or an assist but that wasn’t for a lack of trying. His strength and speed caused lots of problems for Tottenham and always seemed dangerous on the counter.

Vocal and kept the Liverpool players focused with his experience after coming on.