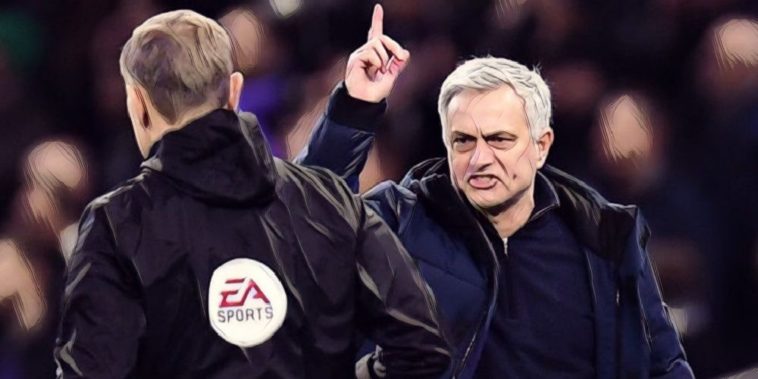 Jose Mourinho has criticised VAR and says the technology makes ‘too many mistakes’ after a drama-filled afternoon as Tottenham secured a 2-0 win over Manchester City.

The north London side gave their hopes of securing a top four finish a major boost with victory over the reigning Premier League champions, goals from debutant Steven Bergwijn and Son Heung-Min sealing three points against the 10-man visitors, who had Oleksandr Zinchenko dismissed for two needless yellow cards.

Despite seeing his side move within four points of the Champions League places, Mourinho once again spoke of his unhappiness at the usage of VAR and believes the system continues to make ‘too many mistakes’.

Raheem Sterling avoided an early red card following a high tackle on Dele Alli despite review from the video assistant referee, whilst VAR would also award City a first-half penalty following delay of more than two minutes, Serge Aurier adjudged to have fouled Sergio Aguero in the penalty area.

Mourinho is livid with Sterling's tackle on Alli but the video assistant referee sticks with Mike Dean's call for a yellow.

VAR continues to prove divisive since its introduction into the Premier League, and Mourinho has questioned the use of the technology and its inconsistencies.

“I thought I was going to love VAR the way I love goalline technology,” said the Spurs boss at his post match press conference.

“I love goalline technology because there is no mistake. The VAR has too many mistakes, too many.

“The game started immediately with the wrong decision. It’s a red card, it’s a direct red card to Sterling.

“I know that Mike Dean has a difficult job. He’s on the pitch and it’s 200 miles an hour. I wouldn’t like to be a referee because it’s so difficult.

“Sometimes I try in training sessions and I realise that it’s too difficult. So for me Mike Dean, good performance. The problem is the VAR.”