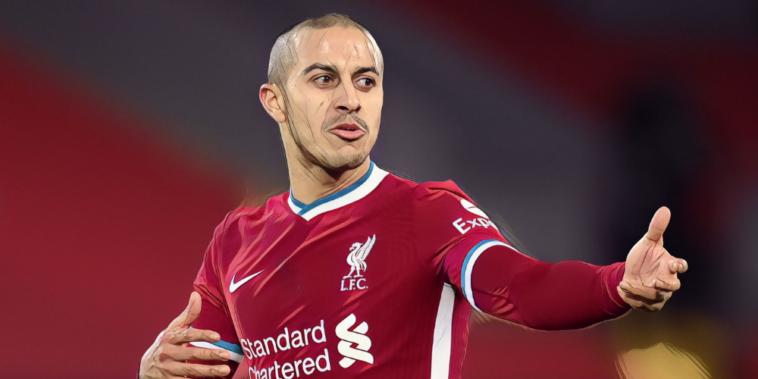 Thiago Alcantara has admitted he enjoyed playing in a more advanced role, following Fabinho’s return to Liverpool’s midfield in the win over RB Leipzig on Wednesday night.

The Reds clinched a 2-0 win to secure a relatively comfortable passage into the Champions League quarter-finals, with the result a huge boost amid their recent dismal league form.

With the champions currently sliding down the table after losing six of their last seven Premier League games, one man who has been heavily criticised is summer signing Thiago, the Spaniard yet to truly make an impact in the top-flight.

The former Bayern Munich and Barcelona midfielder is yet to register a goal or an assist for the club this season, in what has been an immensely difficult campaign for Jurgen Klopp’s injury-ravaged side.

One key factor in their current slump has been the inability to field a first choice starting XI for much of the season, with the midfield suffering from the injury crisis at the heart of the defence.

With Virgil van Dijk, Joe Gomez and Joel Matip all out, Klopp has been forced to play usual midfielders Jordan Henderson and Fabinho at centre-back at times, forcing Thiago into a more defensive midfield role.

However, the return of the Brazilian to midfield against Julian Nagelsmann’s looked to have made a huge difference, not only for his own performance, but also in allowing Thiago to play a more advanced role, something which he clearly enjoyed.

“For sure, because you are always near the goal, you can create chances and you can score. So it’s a nice position as well,” Thiago told the Liverpool website.

“You can split it up a bit and move some lines forward, and you can be more confident and play with the strikers.

“He [Fabinho] is a great player. He gives us a lot of confidence on our backs and it’s awesome to play alongside him.”

In truth, their European exploits have been a welcome solace in recent weeks amid their league woes, the 29-year-old admitting that his side can take confidence forward after beating the Bundesliga side, with a clash with Wolves to come on Monday night.

“It’s like a positive injection to our morale,” he continued.

“I think we deserve to celebrate and to be happy with something, and from now on have this feeling that we have right now. And with that, we can win all the games that we have left.

“It’s been a tough period for all of us because in our worst nightmares we didn’t expect that we are now in this position in the Premier League.

“But we are trying to perform as best as we can and try to get better in every training session. I think this performance is a positive thing for all of us.

“This feeling we have right now, we have to celebrate a little bit with each other in a moderate way and with this feeling prepare the [Wolves] game and move on.”