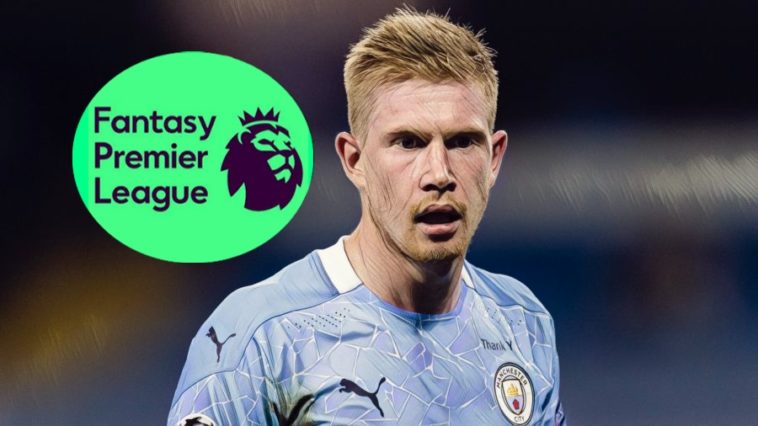 The finish line is in sight for Fantasy Premier League managers with the run-in fast approaching, just 11 rounds of fixtures to go ahead of gameweek 28 this weekend.

Arsenal host Tottenham in the north London derby in the pick of the Premier League clashes, whilst Manchester United host fourth-placed West Ham and Leeds face off against Chelsea at Elland Road on Saturday lunchtime.

Friday night football also sees Newcastle take on Aston Villa and ahead of the early deadline we bring your our best selections for the crucial captaincy.

Here are four of the best captaincy options for gameweek 28:

Kevin De Bruyne is back from injury and returned to form during Manchester City’s 5-2 thrashing of Southampton on Wednesday, bouncing back from a disappointing Manchester derby performance to return 14 points against the Saints.

The Belgium international scored twice against Ralph Hasenhuttl’s side in an encouraging sign that the midfielder is getting back to his best, with the underlying statistics pointing towards De Bruyne being the safest captaincy choice amongst Manchester City’s options at Fulham this weekend.

De Bruyne ranks joint-first alongside Harry Kane for assists per 90 minutes this season, whilst he leads the figures for expected assists per 90 and is fourth in the division for key passes despite missing large parts of the season through injury.

Fulham have been impressive defensively lately and it may take a piece of magic to unlock their defence this weekend, though De Bruyne is a player capable of picking the lock at Craven Cottage.

Riyad Mahrez – sensational in the dismantling of Southampton – offers an intriguing differential option for those prepared to gamble on Pep Guardiola’s rotational roulette. He has, however, started eight of the club’s last nine league fixtures.

Amongst the form players in the division with four goals in his past five league fixtures, Everton’s home clash with Burnley offers Richarlison a chance to get back on the scoresheet following the defeat at Chelsea last time out.

The defensive strength which has defined Burnley in recent seasons has dwindled during the current campaign, with the Clarets having kept just two clean sheets in their past 10 fixtures.

Only West Bromwich Albion have conceded more than Burnley’s average of 14.4 shots per game this season and Everton could be primed to take advantage this weekend as they look to get their push for the top four back on track.

Harry Kane is the only forward who has averaged more points than Richarlison per gameweek over the past six fixtures and the Brazilian – owned by just 8.9% of managers – offers differential potential.

The classic conundrum of deciding between form and fixture, Leicester’s home clash with bottom side Sheffield United looks appealing when choosing a captain in gameweek 28.

After the brief threat of a revival, the Blades have lost five of their past six and look like a side resigned to the fate of playing Championship football next season.

Leicester remain third and in pursuit of Champions League football, though have seen their squad decimated by injuries with key figures in James Justin, James Maddison and Harvey Barnes all currently sidelined.

Brendan Rodgers’ side should, however, have enough to get past a struggling Sheffield United side and the fixture offers Jamie Vardy a chance to rediscover his goalscoring touch following a lean spell.

This selection is most definitely filed as a punt given the 34-year-old’s run of one goal in 11, but Vardy – a lifelong Sheffield Wednesday fan – relishes facing the Blades and has two goals and one assist in three previous appearances against Chris Wilder’s side.

The leading forward in the game delivered a huge haul in gameweek 27, playing a direct role in all four of Tottenham’s goals in the 4-1 win over Crystal Palace, scoring twice and providing two assists.

Jose Mourinho’s side have bounced back from a difficult period and head into this weekend’s north London derby in strong form, having won three consecutive fixtures to strengthen their challenge for a top-four finish.

Mourinho has utilised an attacking side in recent weeks with Kane thriving alongside Son Heung-Min, Lucas Moura and a resurgent Gareth Bale in a fluid front four, the sparkling form of the latter having had a positive impact on the England captain.

Spurs will be confident of securing three points at the Emirates and it is a fixture that Kane has revelled in in recent years, scoring 11 goals in just 12 appearances against Arsenal, including a goal and assist in the reverse fixture this season.

Kane has averaged 6.2 points per gameweek over his last six fixtures and should be strongly backed to continue that form against the Gunners this weekend.