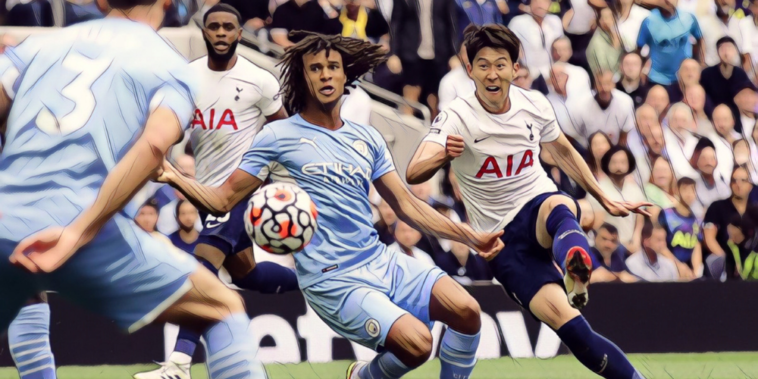 Manchester City’s defence of the Premier League title began in defeat this weekend, with the champions losing 1-0 at Tottenham in a disappointing display.

Son Heung-Min scored the only goal of the game in north London as the Nuno Espirito Santo era got up and running at Spurs, leaving City with ground to make up already following opening wins for their title rivals.

Following City’s loss in the capital, we look at the seven times the defending champions have failed to win their opening Premier League fixture.

Manchester United’s treble winners failed to get off to a winning start the following season, as the Red Devils were held at Everton.

Dwight Yorke had opened the scoring after just seven minutes at Goodison Park, though Sir Alex Ferguson’s side suffered a late blow as Jaap Stam’s own goal rescued a point for Everton four minutes from time.

United bounced back with a 4-0 win at home to Sheffield Wednesday in their next fixture, part of a sequence of six consecutive victories – including wins over Leeds, Arsenal and Liverpool – as the champions took control of the title race.

Having reclaimed the Premier League title from Chelsea during the previous season, the Red Devils failed to win in their opening three league fixtures of the 2007/08 – including a goalless draw with Reading at Old Trafford in their first fixture of the season.

The stalemate with Reading was followed by a draw with Stoke and defeat to Manchester City, leaving the champions a distant 17th after three games of the campaign.

Sir Alex Ferguson’s side responded with an eight-game winning run however, starting the momentum that would see a second successive title head to Old Trafford at the season’s end.

United pipped Chelsea to the title by just two points, before beating the same opposition in the Champions League final to secure a historic double.

United again failed to win their first fixture the following season, though it mattered little once more as the Red Devils won a third Premier League title in succession.

The champions were unconvincing during an opening weekend clash with Newcastle at Old Trafford, falling behind to Obafembi Martins’ powerful header before Darren Fletcher levelled just two minutes later.

United won just one of their opening four fixtures of the campaign, though edged Liverpool in the title race after finishing four points clear of Rafael Benitez’s side.

The first occasion on which the defending champions lost their opening fixture and failed to retain the title, Jose Mourinho’s second spell at Chelsea ended spectacularly during the 2015/16 campaign.

Chelsea had finished eight points clear of nearest challengers Manchester City the previous season, but began their defence with a 2-2 draw with Swansea at Stamford Bridge.

Swansea twice levelled through goals from Andre Ayew and Bafetimbi Gomis, in a clash which saw Thibaut Courtois sent off for Chelsea just seven minutes into the second half.

Chelsea’s fortunes failed to improve as the Blues lost nine of their opening 16 fixtures of the campaign, Mourinho dismissed in December with the club 16th and just one place above the relegation places.

Leicester’s title success remains one of the greatest ever sporting shocks, having emerged as champions despite pre-season odds of 5000/1.

The Foxes’ defence of the title began in ignominious fashion however, losing at newly-promoted Hull on the opening weekend of the season as Robert Snograss’ goal secured three points for the Tigers.

Leicester won just two of their opening eight fixtures and their concerning form saw Claudio Ranieri sacked, and whilst replacement Craig Shakespeare steadied the ship, the Foxes’ 12th place finish was the lowest of any defending Premier League champion.

Chelsea were defeated in one of the most surprising opening day results in recent memory, as Antonio Conte’s champions were beaten 3-2 at home to Burnley in 2017.

Chelsea fought back in the second period as debutant Alvaro Morata pulled one back, though Cesc Fabregas’ second yellow card reduced to the Blues to nine men.

David Luiz pulled another goal back two minutes from time, but it was too little too late as Chelsea crashed to defeat in the capital.

Conte’s side were unable to repeat their performances of the previous season despite FA Cup success, finishing fifth to miss out on Champions League qualification.

It is the first time that the five-time Premier League champions have lost their first fixture of the following campaign, with Son Heung-Min continuing his fine goalscoring record against City after scoring the only goal of the game for Spurs.

Guardiola’s side have now faced Spurs on four occasions at the Tottenham Hotspur Stadium and lost on each visit, conceding six goals and failing to score.