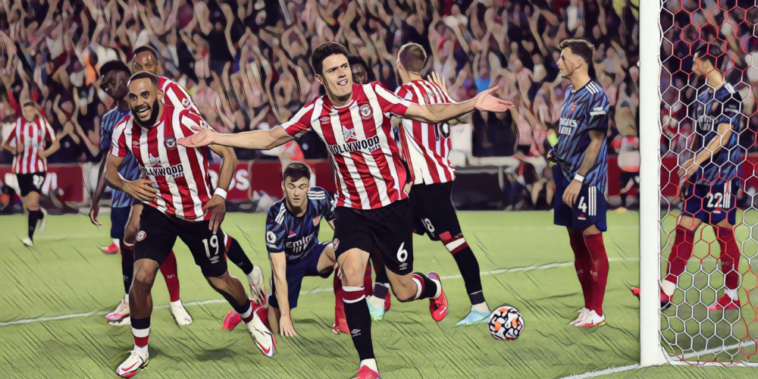 It’s difficult to look beyond Brentford’s upset win over Arsenal in the Premier League’s curtain-raiser as our Moment of the Week, a shock result played out amid the delightful backing track of fans returning.

Thomas Frank’s side were vibrant and well worth their win against a lacklustre Arsenal outfit, the Bees buzzing with energy in an atmospheric Brentford Community Stadium.

The absence of fans has been sorely felt in the Premier League as a result of the pandemic, with the spectacle of the division greatly improved by the raucous roars of supporters in the stands.

Memories that will last a lifetime for this young Brentford fan ❤️

After a 74-year absence from the top division of English football, Brentford announced their return in fine fashion and there will be few teams who relish visiting the fearless newly-promoted side on home soil.

Paul Pogba polarises opinion like few other Premier League players, but this weekend was a time to cast aside the distractions of Ole Gunnar Solskjaer’s ‘media magnet’ and appreciate what a wonderfully talented player the midfielder is.

Pogba was exceptional as Manchester United began the campaign with a 5-1 thrashing of Leeds, their statement victory orchestrated by the France international and his cutting passing range.

The 28-year-old dissected the Leeds defence with ease as his technique and vision shone through in a superb showing, drifting in from a position on the left to devastating effect.

Pogba finished the contest with four assists, becoming just the eighth player in Premier League history to provide four goals in a single fixture and incredibly bettering his entire total from last season.

Leeds were unable to live with the midfielder who was firmly in the mood on the season’s opening weekend, his combinations with Bruno Fernandes and Mason Greenwood hugely encouraging as the Red Devils look to end their barren run without silverware this term.

Marcos Alonso scored Chelsea’s first goal of the new season with a wonderful free-kick against Crystal Palace, the defender bending a superb effort up and over the wall to open the scoring at Stamford Bridge.

It was another set-piece special for the Spaniard who has now scored more free-kicks (4) for Chelsea than any other player since his arrival in west London, whilst he is also the leading scorer amongst Premier League defenders (22) during that time.

Starting the week with this bit of magic from Marcos! 🪄

All the #MondayMotivation we need! 👊 pic.twitter.com/ckR8X2RfrL

Chelsea are understood to have considered allowing the 30-year-old to leave during the summer, but Alonso’s opening performance of the campaign was a reminder of what he can provide when utilised in a wing-back role.

Given the greater licence to bomb forward and attack, there are few players who are as effective.

West Ham’s season began with a comeback win against Newcastle at St James’ Park, with the club’s forward options interchanging impressively in an entertaining 4-2 win.

Michail Antonio led the line in fine fashion, though the forward endured a nightmare few seconds with an incredible double miss.

Antonio first spurned a glorious chance when heading against the post when it appeared easier to score, only to see his blushes spared as Pablo Fornals was brought down or a penalty in the immediate aftermath.

Antonio stepped up to take the kick and saw his low effort beaten away by Freddie Woodman, though breathed another sigh of relief as Tomas Soucek reacted quickest to turn in the rebound.

Micah Richards refreshingly spoke out on the double standards of the media following Tottenham’s win over Manchester City this weekend, drawing comparisons between the treatment of Paul Pogba and Harry Kane as speculation continues to surround the futures of both players.

🗣 "Kane's not turned up for training and we call him a saint, Pogba's never said he wanted to leave and he's getting abuse."@MicahRichards @GNev2 and Graeme Souness argue about the treatment of Paul Pogba's future compared to Harry Kane pic.twitter.com/JADAyN0Gue

The opening weekend of the Premier League saw several summer signings turn out in their new colours for the first time, with many making immediate impressions.

Trevoh Chalobah scored a brilliant goal on his first Premier League appearance for Chelsea, but it was the showing of Watford’s Emmanuel Dennis that takes our Dream Debut accolade.

Watford’s business so far has been modest given the financial implications of some questionable recent spending, but the signing of Nigeria international Dennis looks like a shrewd addition.

An impressive debut for Watford. pic.twitter.com/WdnnQLlpDz

Picked up for a bargain fee from Club Brugge, the 23-year-old announced himself to the Hornets’ supporters with a goal and assist in the club’s 3-2 win over Aston Villa, whilst his partnership with the irrepressible Ismaila Sarr showed early promise.

Take your pick from an Arsenal defence bullied and batted by Brentford on Friday evening, with marquee arrival Ben White enduring a difficult debut against the Bees.

White was dominated aerially and looked uncomfortable throughout, though was far from helped by a shaky showing from centre-back partner Pablo Mari.

The Spaniard struggled to live with Bryan Mbuemo as the electric forward ran the visitors ragged, before misjudging a long throw-in in the lead up to Christian Norgaard’s second for the Bees.

Arsenal’s high line proved problematic throughout and it was Mari who was the player most often exposed on a sobering night for the Gunners.

After the disappointment of last season the pressure has just been turned up on Mikel Arteta, who will need his defenders to show significantly more fighting spirit than they mustered this weekend.