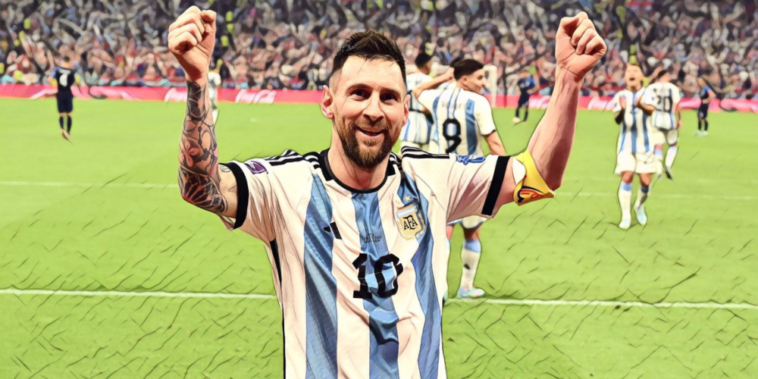 For many, Lionel Messi is the greatest footballer the game has ever seen. This weekend Messi will have the chance to make perhaps the definitive case in his argument, as Argentina take on France in the FIFA World Cup final.

Football’s biggest prize is the glaring omission from a résumé of records and trophies we’re unlikely to see repeated, with Messi a record seven-time winner of the Ballon d’Or and the greatest goalscorer in the history of Argentina, Barcelona and Spanish football.

The 35-year-old has been in sparkling form at this World Cup and will surely be voted as the Player of the Tournament if Argentina emerge as world champions in his final World Cup fixture.

Ahead of the final, we look at ten absolutely mental stats from Messi’s World Cup career.

Youngest player to play for, score and captain Argentina at a World Cup.

Messi made his World Cup debut during the 2006 tournament, one which saw him become the youngest player to both play for and score for Argentina at a finals. He came off the bench to mark his World Cup bow with the final goal in a 6-0 thrashing of Serbia.

Four years later, he wore the captain’s armband for the first time in a group stage clash with Greece. It made Messi the youngest player, aged just 22, to captain Argentina in a World Cup game.

Most ever World Cup appearances

Messi matched the record of Lothar Matthaus for World Cup appearances during Argentina’s semi-final win over Croatia in Qatar.

It was a memorable performance from Messi as he scored one and created two other goals, booking La Albiceleste’s place in a sixth final. The clash with Croatia was Messi’s 25th appearance at the World Cup, moving him level with German great Matthaus. He is in line to move past the 1990 World Cup and Ballon d’Or winner in Sunday’s final against France.

Most World Cup appearances as captain

Messi first captained Argentina at the World Cup in South Africa (2010), before assuming the armband on a permanent basis the following year.

He led the South Americans into their World Cup campaigns in 2014, 2018 and 2022, with 18 of his 25 appearances at the finals having come wearing the armband. Messi set a new record in the win over Croatia, moving past Mexico legend Rafael Marquez (17). Compatriot Diego Maradona is third on the list, having captained Argentina 16 times at the World Cup.

Messi is his nation’s all-time record goalscorer having netted 96 goals in 171 appearances for Argentina. He is also now Argentina’s leading scorer at the World Cup after a fine campaign in Qatar, with his five goals at the 2022 tournament moving him past Gabriel Batistuta’s record (10).

Messi has now scored 11 goals at the World Cup, ranking him joint-sixth overall alongside Jurgen Klinsmann and Sandor Kocsis. Pele (12) is next and could be levelled with a goal in Sunday’s final, with Just Fontaine (13), Gerd Muller (14), Ronaldo (15) and Miroslav Klose (16) leading the list.

The longest period between a player’s first and most recent World Cup goals (16 years and 180 days).

Messi’s achievements are even more unfathomable when longevity is considered, with the Argentine icon having been at the pinnacle of the sport for almost two decades.

He is one of just five players to have appeared at five World Cups, alongside Mexican trio Antonio Carbajal, Rafael Marquez and Andres Guardado, Germany’s Lothar Matthaus and Portugal’s Cristiano Ronaldo.

No player has ever had a longer gap between their first and most recent World Cup goals. Messi scored his first against Serbia on 16th June 2006 and netted his most recent effort against Croatia on 13th December 2022. It is a gap of more than 16 years.

This Argentina reporter spoke from the heart to Lionel Messi 🥹💙 pic.twitter.com/uu7GAKHjGq

The only player to score a World Cup goal in his teens, 20s and 30s.

Such has been his long career at the top, Messi is also the only player to have scored World Cup goals in his teens, 20s and 30s.

His first came aged just 18 years and 358 days, with only six players having ever scored a World Cup goal at a younger age. Now 35, he is on course for the tournament’s Golden Boot and is the joint-leading scorer at Qatar 2022 alongside Kylian Mbappe.

Just one player has ever recorded more World Cup wins than Messi (16), who could tie the record in Sunday’s showdown with France.

Miroslav Klose was on the winning side 17 times for Germany across four tournaments, reaching at least the semi-final in each of his four World Cups. Messi has 16 wins so far and a 17th would see him crowned world champion in Qatar.

Another record that Messi could tie, or surpass, is for the most World Cup assists. Pele currently holds the record with ten goals created, with Messi next on the list with nine.

Messi levelled Pele’s record for knockout stage assists (6) during the semi-final win over Croatia and will have one final chance to level the Brazil great this weekend.

He is the joint-leading assist provider in Qatar, with three. Argentina have scored 12 goals at the 2022 World Cup and Messi has been directly involved in eight of them.

🏅 🐐 Lionel Messi has now won 𝟑𝟎𝟔 MTOM awards in all competitions since 2009.

💯Representing 52% of the matches he has played in that period.

The only player to assist goals at five different World Cup tournaments.

Messi holds a unique record as the only player to have assisted goals at five different World Cup tournaments. He has created at least one goal in each World Cup he has featured in, with no player coming close to matching that feat.

Pele, Grzegorz Lato, Diego Maradona and David Beckham are the closest to doing so, having provided assists in three separate tournaments.

In addition to being one of the greatest goalscorers and creators of all time, Messi has a strong case as the game’s finest-ever dribbler.

No player has ever recorded more successful dribbles at the World Cup than Messi, whose 126 place him ahead of Diego Maradona (106).

Brazil’s Jairzinho is next on the list (78), while Eden Hazard is his closest modern comparison with 65 successful dribbles for Belgium. Mario Kempes (61) and Arjen Robben (56) round out the top five, with the data collected from the 1966 tournament onwards.