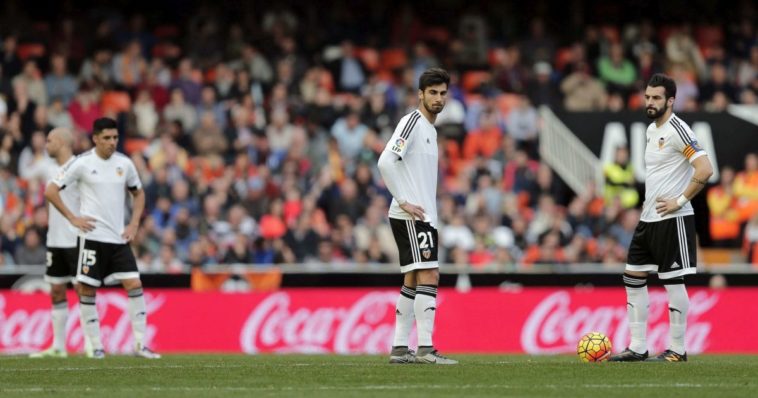 Valencia CF are one of the biggest and most successful clubs in the history of Spanish football. A club which has always been considered to be a European powerhouse. Despite their rich history, Los Murcielagos are in a period of steady decline. Let’s take a look as to why.

After picking up two UEFA Cups (now Europa League) and a La Liga title early in the 2000s, Valencia were destined for a fairly fruitful next few years. However, this wasn’t to be the case. It all started in the summer of 2007 when a fight between then manager Quique Sanchez Flores and sporting director Amedeo Carboni broke out. The quarrel ended up in the departure of Carboni.

Flores was also fired early on in the ’07-08 season, after a highly disappointing set of performances to start the season. Although Jose Mourinho and Marcello Lippi were tipped as Flores’ successors, it was eventually Ronald Koeman who was given the job.

Koeman’s tenure was not much better either, as the Dutchman had Valencia alarmingly close to the drop zone. The club fired Koeman in April of 2008, meaning he could not even complete six months at the club. Despite the catastrophic season, Valencia ended up in 10th place, thanks to caretaker manager Voro.

Although a bad season with a mid-table finish wasn’t what the Valencia supporters expected, it was certainly better than getting relegated.

Although this period wasn’t as bad on the pitch, it was much worse off it. After the appointment of a young and promising Unai Emery, things were looking up at the Mestalla, and rightfully so. Emery was then at the start of his managing career, and had come off a successful season at UD Almeria, giving them promotion to the top flight.

The Spaniard did a good job in his first season, starting off the season well and eventually finishing in the top 6. Valencia were at the very top in the season too, but failed to finish in a Champions League spot after some crucial losses towards the end of the season.

Despite a decent season, there were bigger problems on Los Che’s mind. Reports of the club in massive debt and players not being paid surfaced in the middle of the season. Debts exceeding €400 million. Though Valencia had taken a loan until the end of the season, it was not enough for the future of the club.

The next season (’09-10) was a much better one for Valencia. Emery’s side finished third in the league, securing a Champions League spot.

Los Che still were facing huge debts at the turn of the decade, and were forced to sell David Villa and David Silva in the summer of 2010. Both Silva and Villa were among the club’s top talents at the time and left the club to improve its financial situation.

Valencia finished third again next season, proving that Emery was the right man for the job. Then-captain Juan Mata was sold to Chelsea next summer, again to help the club’s finances. The ’11-12 season was the final one of Emery’s tenure at the club, as he proceeded to go to Spartak Moscow for a season.

Club president at the time, Manuel Llorente, announced that the debt had decreased, and that work on Valencia’s new stadium would resume at some point in 2012.

After Emery’s departure, the club struggled to find a suitable manager. First, his successor, Ernesto Valverde stepped down after failing to meet expectations of the board. Miroslav Đukić was appointed as the manager for the 2013-14 season, but was sacked just six months later due to a horrific start to the season.

Valencia also sold their star player, Roberto Soldado to Tottenham in the same summer, much to the fans’ dismay. Dukić was ultimately replaced by Juan Antonio Pizzi. Doing well in the Europa League, the club eventually lost to eventual winners, Sevilla.

In August 2014, Singaporean billionaire Peter Lim was made the new owner of Valencia CF, after purchasing 70.4% of the club’s shares. Pizzi was sacked after Lim’s takeover, much to the astonishment of the fans. It was later revealed by president Salvo that hiring Nuno Santos (Pizzi’s successor) was one of Lim’s conditions in his purchase of the club. The main reason behind this is considered to be the close relationship between Peter Lim and Jorge Mendes (Nuno’s agent).

Despite the controversy, fans were excited to see an all-new Valencia, with no debts and no problems. Los Ches were very active in the ’14-15 window, signing players such as Alvaro Negredo and Andre Gomes. Nuno’s first season in-charge ended up with Valencia securing a Champions League spot, a fairly good start.

President Salvo, a popular man among the fans, stepped down from his post in July 2015, citing personal reasons. Although Valencia managed to qualify for the UCL group stages that season, they never got through to the knockout stages.

The 2015-16 season was expected to be a very good one for Valencia, but sadly, it was the exact opposite. A poor start meant that Nuno resigned before the January transfer window. His replacement shocked almost everyone in the football world, Gary Neville. Neville had never managed a football club before, and it showed. He won only 3 out of 16 games, and was sacked before the season ended. Valencia ended up finishing the season in 12th. Terrible.

Expectations were again high at the start of the 16-17 season. Although stars such as Andre Gomes, Alcacer and Mustafi had left the club, Nani and Ezequiel Garay had come in to improve the squad.

Like the last one, this year was also disappointing for Los Ches. Former Italy coach Cesare Prandelli was brought in as manager, after another bad start to the season. He resigned no more than 3 months later. This period was full of turmoil in the Valencia management. Following Prandelli, the club’s Sporting Director also left the organisation.

Once again, the saviour for Valencia was Voro, who managed to keep the club safe from relegation, similar to how he did a few years ago.

Los Ches are currently under manager Marcellino Toral, who was appointed earlier this summer. The club brought in big names such as Geoffrey Kondogbia and Arsenal’s Gabriel, in attempts to progress and go back to their glory days.

Valencia are as of writing, 8th in La Liga, having pulled off an impressive draw against Real Madrid.

Valencia CF was once regarded as a force to be reckoned with, a club which was the only one who could put up a fight against Real and Barca. But now, after numerous problems in the last decade, the club is lingering in the bottom half of the La Liga.

Although the financial status of the club is now healthy, Valencia needs a good and proven manager. Someone who can build the club up again, someone who needs to do what Emery did. T

You’re a bit late with this article, which would have been timely last season but is questionable this season. We’ve done well in this transfer window, are off to a good start and confidence is sky high and in Marcelino we have a good and proven manager. We won’t be in the bottom half this season. Top 6 and a fight for top 4.

Although I do agree that Valencia have had a great start and look stable, it is too early to say what will happen. I myself hope Los Ches can compete for a Champions League spot.