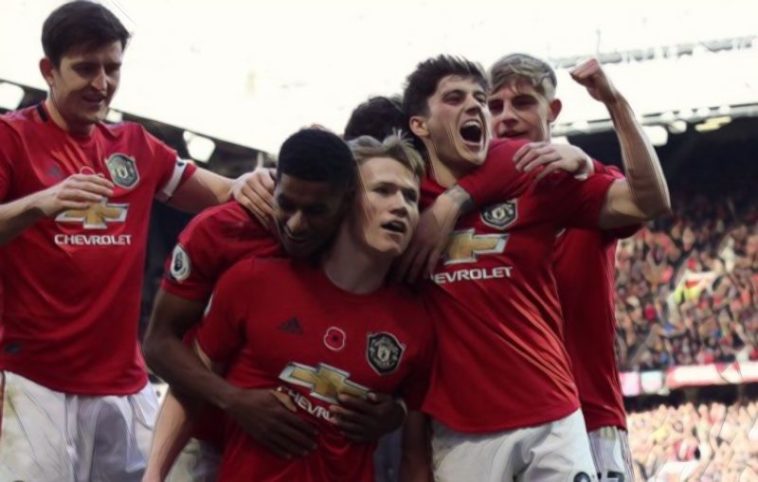 Manchester United’s reputation for producing homegrown talent was enhanced on Sunday, as their clash with Everton at Old Trafford was the 4000th consecutive game in which an academy product featured.

This current United side are a perfect exemplification of that; the average age of the team on the pitch is 25.2, the youngest in the Premier League. They also give more minutes to club-trained players than anyone else in the top flight (22% of total minutes this season), with 13 players getting their debut from manager Ole Gunnar Solskjaer in the past year. The Norwegian is clearly carrying out a remit to rebuild a team that often looked jaded last season

One of the latest academy graduates is Mason Greenwood, who is having a breakthrough campaign with the Red Devils. The 18-year-old came off the bench to score the equaliser, his seventh goal in 19 appearances. Remarkably, he is the club’s second top goalscorer this season.

In terms of approach, it’s clear that Solskjaer wants United to play with more speed and get the ball forward more. Of the so-called big six, plus Leicester City and Wolves, they have played the fewest passes backwards this season.

Although their defence is more solid than last season, allowing fewer high-quality chances overall, they don’t keep very many clean sheets – their last shutout came in September when they defeated Leicester City 1-0 at home.

12 – David de Gea has conceded a goal in each of his last 12 Premier League appearances for Manchester United – his longest run without a clean sheet in his career in the competition. Leaking. #MUNEVE pic.twitter.com/rFZIL2cooF

Everton’s opener at the weekend was the 20th goal in 17 league matches the hosts have conceded, although United are entitled to feel aggrieved by the referee’s decision to let the goal stand. Dominic Calvert-Lewin clearly fouled David De Gea as the ball flew into the six-yard box from a corner and in off Victor Lindelof for an own goal.

Another weekend, another Liverpool win. The Reds are now 34 games unbeaten in the Premier League, the third longest streak in the competition’s 27-year history. They are now just six games behind Chelsea’s club record 40 game stretch without defeat.

Remarkably, they have won 25 of their last 26 matches, something no other club has ever done.

Liverpool 2-0 Watford (FT) – For the FIRST TIME in the 131-year history of the First Division of England a team has added 25 wins and 1 draw in an interval of 26 consecutive games. They have 76 of 78 possible points. They have no rival. They only fight against history. pic.twitter.com/DPlFW4Q1Yk

Sadio Mane set up Mo Salah for the opening goal in their 2-0 win over Watford at the weekend. It was the Senegalese forward’s eighth goal involvement in as many league games for the club.

Heart on your sleeve?

A bitterly disappointing result for Chelsea on Saturday, as they lost 1-0 to Bournemouth, who were winless in five matches. The Cherries have secured three wins at Stamford Bridge since their promotion to the Premier League in 2015. Only Liverpool have won as many.

The Blues’ performance levels have not dropped a huge amount in recent weeks, and it seems as if they are going through a bit of a finishing slump: they have scored four in their last games, whereas they found the net 13 times in the previous five games.

Only two teams in the top flight have failed to gain a single point from a losing position. One of those teams, you won’t be surprised to find out, is lowly Norwich City. The other is fourth-placed Chelsea, although given their recent form they might not be in the top four for much longer with Spurs just three points behind.

That statistic points to a surprising lack of resilience in Frank Lampard’s charges, which may count against them dearly in the Champions League, where they will face Bayern Munich in the round of 16.

The Champions League draw for the last 16